A few weeks ago I had a conversation with a mutual on Twitter about some productivity software I use. As someone who has been using OS X for over a decade now, the exchange made me think that others might find it useful to know which apps I swear by on OS X for work or creative projects related to my writing.

Since my “productivity hacks” are really just techniques that I use to trick my brain into starting something, most of this list helps me do that, either by being: pleasant to look at; fun to use; or by invoking a more productive mood—there is something to be said about those little signals that cue your brain into behaving.

Before we jump in, a quick note that while several of these apps have versions for Linux or Windows (or the iPhone), if you are not an OS X user this list may not be terribly useful to you. As this list ended up becoming a little long, I have split it into two. The second part will be released in a few weeks. And, most importantly of all, this blog post is not sponsored in any way. 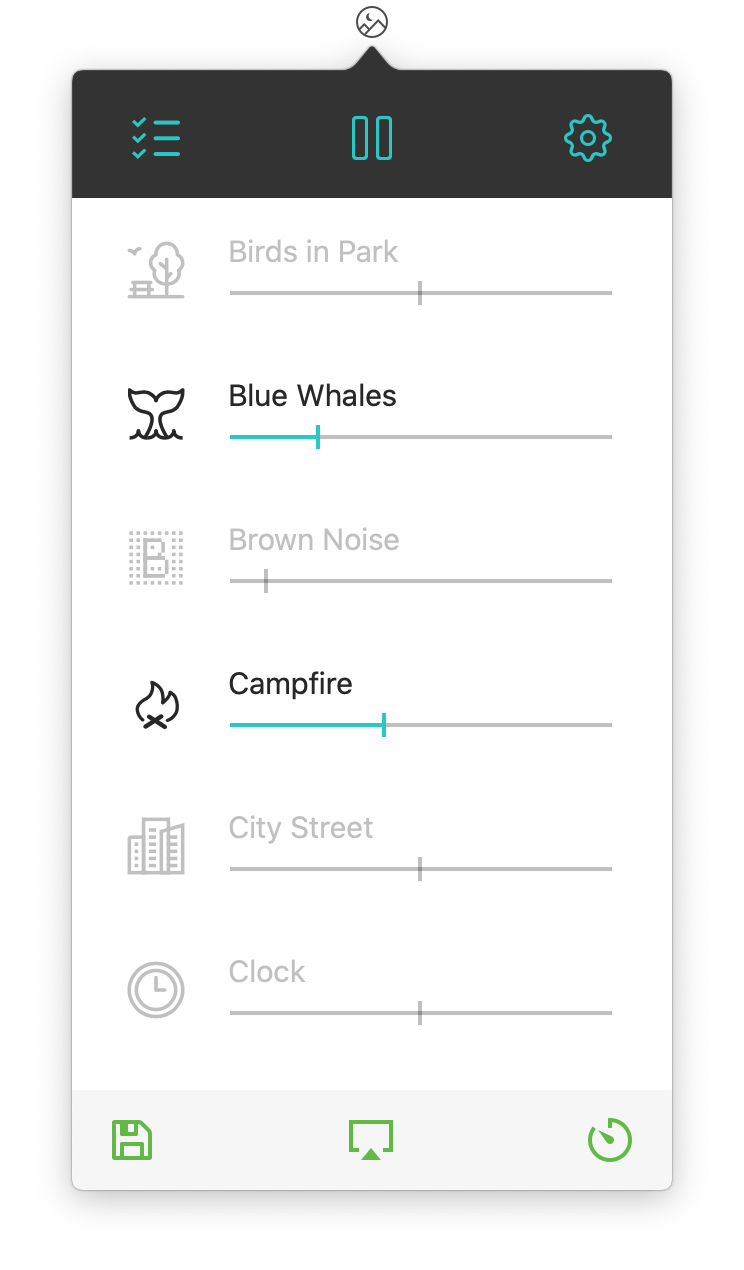 If figuring out exactly what kind of music you want to listen to is just beyond you on an exhausting day, the rhythm of the dramatic shoreline or gentle summer rain amidst the friendly chatter of a crowded café can come to the rescue! Noizio lives in my menu bar, is straightforward to use, and stacking the noise samples at different volumes leads to some pretty excellent soundscapes. I've always been a big fan of gentle background noise while I'm working, but especially now that I'm no longer alone for a big chunk the day and I spend a lot more of my day wearing headphones than I used to.

I follow a good number of blogs, some which update infrequently or unpredictably, and using an RSS reader is still the most convenient way for me to follow them all. Leaf is an easy to use and attractive RSS reader that sits on your desktop. Brilliant for following hundreds of blogs and literary magazines where signing up for zillions of email alerts is frankly not feasible. I also use Leaf to follow a few newsfeeds from newspapers and news sites (though admittedly I am cutting down on that lately, because it's like signing up to sit right in front of an open firehose).

I use the free version of Toggl Desktop almost every day I’m at my computer to write or work. Because of how quickly I can "toggl" the task timer on and off from the Desktop, I can track myriad tasks without the tracking feeling like an extra task in itself. I can also use it offline, which is key.

It's added an interesting extra dimension to being at the computer when I'm not actively working or writing, because if I'm not doing something that I want to track time for (mindlessly browsing YouTube for non-research reasons, for example) it often motivates me to close my laptop and do something else with my time, like catching up on the endless pile of books that would very much like to be read!

I have had Quicksilver installed on every single installation of OS X I've ever used since 2008, and I dread the day that active development of this free app ever ends. I don't even know how to describe it other than it's basically a much better—and faster—version of Spotlight. Want to open a URL in the background of whichever app you're using without actually leaving the window you have open? Quicksilver can do it at the touch of a button — and so much more.

If you, like myself, prefer typing to using your mouse to navigate your file system, definitely check out this utility app. With the caveat that this impression is anecdotal and really unscientific, I feel like this app has helped me manage my tendinitis exacerbated by laptop track pads!

Oh, Ulysses! I have some reservations about including subscription-service "rentware"* Ulysses in this list, despite using it almost every day—I’m using it to edit this blog post, in fact! I'm philosophically very frustrated with the widespread shift to monthly ongoing payments and some outright shifts to software-as-a-service amongst major software companies (Adobe, Microsoft, etc.). I was an early adopter of Ulysses back when it allowed you to pay for the app once and just own it. I've since been using the old 2017 version of this app. It doesn't have all the feature of the newer versions and is no longer receiving active updates, but it works fairly well for what I need it to do. Unfortunately, new users are obliged to use the subscription service.

I use Ulysses for all sorts of things: formatting blog post drafts, writing reports for clients (I used to just sent clients plain .rtf files but discovered they much prefer receiving pdfs with pretty formatting!), poetry, short essays and nonfiction, and more. Almost anything that doesn’t have big sections or chapters, I use Ulysses for it.

* Rentware: a term I use facetiously to describe any software or service that asks for monthly rent.

This is a little bonus recommendation since Pocket isn't a Desktop app but a browser extension. I read a lot of news articles and research articles, and my browser bookmarks have been a dizzying mess for over a decade! This is where Pocket comes in to save the day. Not only is its "read later" functionality extremely useful and saves me from keeping open a billion tabs, but I like being able to look at my archives whenever I'm trying to recall a statistic or some news that I've just read. Much less chaotic than trying to fish through my browser history or my bookmarks! Also, Pocket does have a tagging system that I should honestly be more diligent about using. (Useful tip: every six months or so I’ll go in and delete any really old articles I haven’t yet had time to read. It’s often a real trip!)

And that's the list of apps for this time. I'll be back in a few weeks with five more Desktop apps that I use every day. In the meantime, do let me know if this blog post was useful, and what your favourite apps are. Do you use any of these apps? If not, what's the first thing you install on any new computer?

Sign up here to get an email every time the blog updates. These emails often include extra little goodies, such as sneak peeks into the writing process or extra content you'll only get via email if you subscribe.

My name is Gersande La Flèche and I am independent content editor, writer and English to French translator working since 2016 for clients in various creative, knowledge-based and technology sectors in Montréal and all over the world.

I am nonbinary and I use they/them/their pronouns exclusively.

Sign up here to get an email every time the blog updates. These emails often include extra little goodies, such as sneak peeks into the writing process or extra content you'll only get via email if you subscribe.