This was a surprisingly productive year in reading, given that back in December 2020 I had given myself a very doable goal of reading around 1.8333~ books a month because I had a feeling I was going to be overwhelmed (I was not wrong.) My total of books read mostly for pleasure and personal interest was a pretty respectable 55!

On top of chronicling my reading in my BuJo, I also used StoryGraph to track some of my reading. I love looking back at my stats which, while slightly incomplete, still give a good demonstration of my reading trends over the months of 2021:

Combining the data StoryGraph and my hand-tracked notes in my BuJo lets me know that my most productive reading months in 2021 were February, March, April, June. My "worst" reading month was September with 2 books read cover-to-cover, which makes sense since September and October are often two of my busiest months by far. But as I managed to surpass my reading goal of reading 1.8333~ books a month, I am feeling pretty good about it!

All right, enough boasting, let's get to the actual books:

I started off the year with the powerful retelling of the Greek Myths from the legendary Odyssean witch Circe as the point of view character. This book was fantastic: ethereal and yet extremely earthly, compelling, vengeful. Through Circe, beyond the exploration of mythological themes from a woman's perspective, we also get a deep look at the natures of solitude and exile, and how societies and communities adjust to remain in control of a woman with power. The book felt a little bit like the unravelling of a tapestry, where each thread was a familiar element in an unfamiliar composition. A book I cannot wait to revisit!

I dove into my feelings on Ekwuyasi's delectable novel back in March of this year over on YouTube. Looking back, it really was a huge standout of my reading this year (and it was also a contender in this year's CBC Canada Reads, and deservedly so!) The novel follows the lives of twin daughters Kehinde and Taiye who have a turbulent relationship with their mother, and whose lives end up leading them to live far away from each other, the geographical distances and international borders reflecting the emotional and experiental differences that grow between the sisters. I found the twin's stories extremely compelling and at times painfully familiar to my own relationship with my family. I've revisited parts of the novel in my mind often in the months since I read it, and I'm really looking forward to rereading it (hmmm, butter!)

Maryse Condé is a luminary in the francophone literary world who in my experience tends to go under the radar in the anglo-saxon world. I actually read this book in high school when I was still in the Québec French secondary school system, and I've known for literal decades that I've been wanting to put some time aside to read this book properly as an adult who now is a little better informed about the trans-Atlantic slave trade, Puritan New England and what happened during the Salem Witch trials. In this famous book, Condé decides to take a look at the marginalized (by both history and Arthur Miller's famous play) historical figure of Tituba, a woman scapegoated and thrown into prison in Massachusetts during the 1692 Salem Witch trials, and whose life before and after those events history has not deemed worthy of note (though speculation abounds). Condé rectifies that situation, and describes her life from its very beginnings in Barbados, to the circumstances that brought her to Salem as the slave of pastor Samuel Parris, and even describes her life after she was thrown in jail and eventually sold again for the price of her jail fees. Through it all, Condé brings a critical, devastating eye on the imperial and colonial politics of the past and today, and presents a stark portrait of religious, gendered, and white supremacist violence and abuse that is still recognizable to us today. The book is a transporting, genre-defying masterpiece, and most of all touchingly and unapologetically human.

I tried — and frankly failed — to describe how Piranesi by Susanna Clarke affected me in my May reading vlog over on the YouTube. I still do not really know how to describe this book. It reminded me of Riven and Myst. It reminded me of some of the most thought-provoking parts of C.S. Lewis' The Magician's Nephew. It reminded me of the Greek myths surrounding the minotaur and the labyrinth. It's also wholly complete and unique onto itself. I also loved its epistolary format and unreliable narrator. Mystery, tension, beauty, confusing journal entries, Piranesi has it all.

I tackled all of my many feelings about Hench in my March vlog over here, and looking back on the year this book really was a favourite for me. It deals so humanely with the bitterness of being multiply physically disabled and struggling, with resentment and vindictiveness, with the complex and sometimes unintuitive feelings of affection and community. This sarcastic and at times gruesome book also deeply questions the intimate connections between modern superhero narratives and the imperial military industrial complex, and seems intrinsically aware that if superheros did exist, it would probably be pretty horrific. A solid win from me, and another one I can't wait to reread.

PS: Okay, I'll admit it, I still ship (using their aliases in order to avoid some spoilers) supervillain The Auditor and white hat Decoherence (I know, I know, I have a type, I'm not sorry) and I'm still mad that it didn't happen!!! Where is my fanfic, writers!?!?!

The book opens on a slushy cold winter in Montréal, 2002. Our narrator is a young nineteen-year-old student who has come to Montréal to study graphic design and illustration, but instead is spending all of his rent money, his ex-girlfriend's rent money, and his friends' rent money on videopoker machines. His poker addiction has spiralled out of control, and he needs a job. He finds one at a fancy Italian restaurant where he somehow survives and thrives as the latest plongeur (French for "diver", but in this context it means dishwasher) under the protection of the rough and sometimes doubtful Bébert. Stéphane Larue dives into all kinds of addiction with a lot of compassion in this novel. Even when his narrator was at his most powerless and hurtful, this autobiographical novel is so affecting that you're still rooting for him to find a way out of the maze his mind (and Loto-Québec's purposefully addictive traps) has created for itself. An extremely strong recommendation from me.

Favourite Nonfiction: The Hidden Life of Trees by Peter Wohlleben

A dreamy and compelling book unravelling the developping science that tries to understand how communities of trees behave, support, and compete with each other. I admit that I sometimes had to put down because it would trigger my anxiety about how badly, cruelly, and inhumane our treatment and management of forests across the globe is (and most especially in Canada). This book hopefully will guide me in being a better companion species to trees, wherever I meet them. 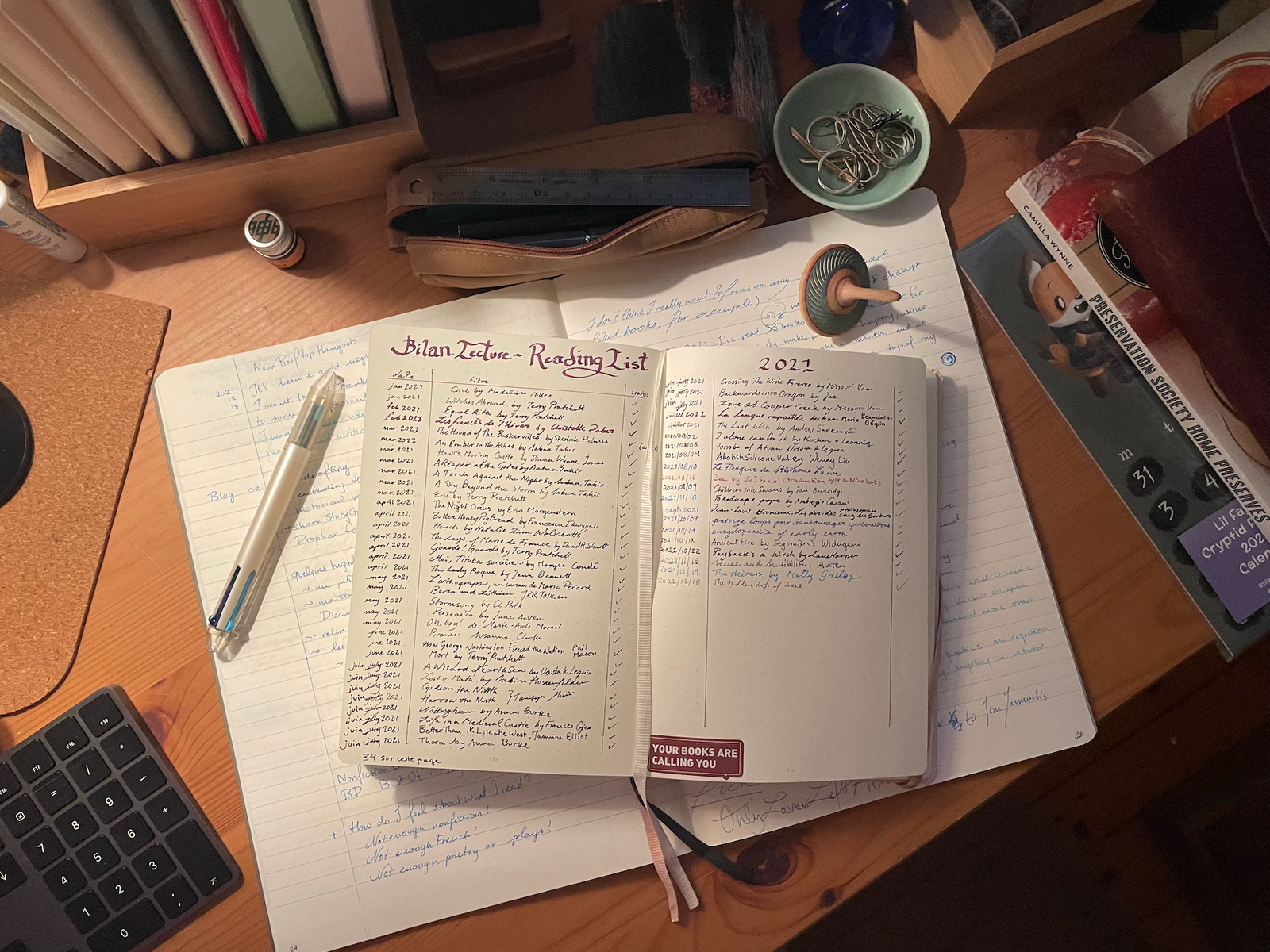 Despite giving myself a pretty low target of books to read, I also had the idea in January of attempting to read all of Terry Pratchett's Discworld for the first time this year. I did not read them in order of publication but in order of which blurbs intrigued me the most. I really enjoyed starting with Witches Abroad and Equal Rites, and ended up reading a handul of others throughout the beginning of the year. But by midsummer, I read Mort which many had told me was a favourite and was surprised when it left me unmoved – I could see what Pratchett was going for, but I was having a hard time feeling invested in the story, characters, or world of Discworld. Perhaps too much Pratchett in too few months? Sounds improbable, but not impossible I suppose! I've decided to return to Pratchett's universe at a later date. No pressure: it'll be there when I'm ready to get back to it.

I then also gave myself a loose goal of reading through The Witcher and Earthsea series as well, and did not really get far along. I read the first three Witcher books, and the first two Earthsea books. But I think I was having a difficult time sustaining that kind of focus over months and months. I'm a very eclectic reader and I tend to like to read a lot of different books at once. I also tend to prefer my books a perfectly complete experience with a beginning and an end per volume.

One thing I noticed this year: because I was reading so much nonfiction for work and my writing projects, I didn't read a ton of nonfiction for pleasure. I think that makes sense, though looking back at the year I am surprised by how little nonfiction I read!

For 2022, I will be giving myself a similarly low goal of reading 2 books a month. Like many people, I have a hard time predicting what the coming month will look like, let alone the coming year. Two books a month seems like a nice, doable goal for 2022!

What about you? How did your reading go this year? What were your best reads and biggest disappointments?