I’ve been on a Mass Effect kink/kick for the past several months. I am currently replaying the trilogy in my spare time for the second time this year. (Eh, it’s a pandemic. What else is going on?) 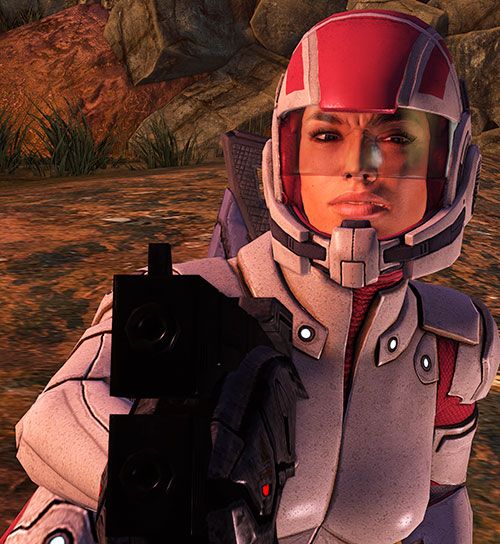 Oh, Ash! Bioware tried to shove you into the role of speciesist straw-woman who quotes Tennyson, seems like the kind of person who would listen to Christian rock, and is incredibly tight with her parents and little sisters. We in the audience responded with much groaning and little patience. Still, I think Ash got the raw end of the awkward “finding its footing” characterization deal of the first game in the trilogy. As most players seem to let Ashley die on Virmire (according to my extremely scientific browsing of Archive of Our Own), the Chief Gunnery Officer’s life is cut tragically short which makes her a good candidate for a brief romance which ends in fiery explosions that leaves you conveniently available to romance a different character or three in the sequels.

Best way to romance Ashley:
Ask about her sisters or her dad, she looooves to talk about her family it’s not alienating at all for an orphaned Shepard (unless you chose the Spacer background but honestly Shepard’s non-existent relationship with her mother in that storyline is depressing as fuck whyyy would you do that). Also: Ash calls Shepard "skipper", so maybe she's into knots in the bedroom?

Joker is a tough cookie. On the one hand, he’s a smart ass who probably deserves a good dose of his own medicine, on the other, I just love that there is an unapologetic depiction of a disabled man on the Normandy, demonstrating that science fiction doesn’t always have to embody a eugenicist “we can science all of our differences away” ideal rooted in ableism, white supremacy, and homophobia/transphobia.

Best way to romance Joker:
Stand quietly behind him while he pilots the Normandy. He really digs the strong, silent type. It’s not creepy at all!

Ever wanted to have sex with an angry giant turtle with telekinetic powers and two sets of cojones? Me neither. But if Wrex’s aggressive smugness won’t win you over, his shotgun skills, thousand-years of experience bounty hunting across the galaxy, and secretly good-hearted protectiveness over Tali and Liara, just scream daddy. Or, well, maybe more like grand-daddy, due to being like a thousand years old.

To be honest: Wrex is a much better bromance than a romance for many reasons, including that I’m pretty sure having sex with a krogan is probably inviting unnecessary mortal peril into one's life.

How to bromance Wrex:
Simple really, defer to him when he describes the genophage’s horrific consequences on his people and get him the best shotgun in the galaxy so he can keep doing what Krogan do best: save everyone from giant monsters.

Speaking of long-lived aliens: Liara is a really adorable blue alien, closest thing to a civilian amongst all of Shepard’s regular ground crew. I enjoy that Mass Effect was brave enough to include a member of a mono-gendered alien species amongst their main characters. I enjoy quite a bit less that they are all basically designed to titillate the basest of geeky teenage boy desires. (Ugh, why would alien species even have binary human genders? It’s so…boring.) At least Luc Besson had the guts to make his otherworldly pretty blue alien lady feel — and sing — like an alien.

Nice human-friendly blue boobies notwithstanding, Liara is an interesting character, and very fun to fluster!

Best way to romance Liara:
She seems to respond well to gentle teasing and generous attentive... attention. Check in on her often, especially after what happens to her mom. (Also, she might have a casual exhibitionist streak, with all of that “embracing eternity” business in front of the crew…)

Garrus is a character who has some of the best character arcs in the series, but at the start he’s a typical hothead with authority issues, a really fucked up sense of priorities, and so. many. daddy issues. He also idolizes Shepard, so if you’re into that kind of dynamic, it’s… fine, I guess?

Truth be told, Garrus is just not a great romance option in the first game. He doesn’t really have his head on straight yet, he’s too starry eyed, and he hasn’t gotten some important life lessons beat into his thick skull. Keep him around for his mechanic and electronics skills (the way you’re treating the poor Mako, you’re going to need all the help you can get). But as a romance, he’s just not a good option.

TALI IS SO CUTE. She is absolutely one of my favourite characters in the series, and her love for her shotgun and her little droid Chatika vas Paus, is chef’s kiss perfection. Fitting properly in the canon of most Bioware characters, she also has lots of daddy issues you gotta talk her through. But apart from that, she’s also tough, reliable, and knows how to use that shotgun.

Gosh, and so cute.

Best ways to romance Tali:
Help her to help her people by sharing classified Alliance intelligence on geth movements in the Traverse, which allows her to honour her own duty to her people (and allows you to stick a nice middle finger to Alliance command for calling you every three star systems to redirect you to go deal with some new problem that for some reason only your team in the entire universe can handle). Also, Tali's favourite vid series is the Fleet and Flotilla series — so demonstrating at least passing interest in her favourite vid can’t hurt your chances!

Judging by Archive of Our Own, you all do love your spiky, cyborg, needle-teeth turians.

In Saren's particular case, I fully admit that I don't get it. His face is too weird.

So... romance tips... errr... Saren probably likes... power play and body modifications. So... lead with that?

Ahh, Mass Effect. The first game has some truly great moments, despite the rough (read: deplorable) fighting mechanics and some bugginess. I have recently learned that a remaster to the original trilogy is in the works — would you buy the Legendary Remaster? Ugh. I kinda shouldn't but I’m sorely tempted.

And, in all seriousness, who is your favourite character to romance? (In-game or in the many branching universes of fanart/fanfiction — all of it is valid!)