"[...] sorrow, but also acceptance. Three cups lie spilled out, but two remain standing, even if at the moment the figure relies on the three. In the sense of awareness the card relates to Justice, emblem of truth and the acceptance of responsibility."
p 200, Seventy-Eight Degrees of Wisdom by Rachel Pollack

I am so tired of talking about the Creative Writing program at Concordia.

Yesterday, I attended Hoa Nguyen's workshop Poetry as (Witch)craft at the Atwater Library hosted by the Québec Writers' Federation (QWF). Hoa Nguyen taught us how tarot, muses, rituals, processes of witchcraft, revision and writing poetry are already very related — and how to tap further into those subtle connections. A few months ago when I came across the workshop on the QWF website I knew I had to make an effort to register and attend the workshop. Because I do, sometimes, miss creative writing workshops. Because I miss talking with other writers about writing. Because I am trying (?) to write again. Because I am writing again. And, in the last year, I have also renewed my interest in the tarot. The workshop's topic and timing felt fortuitous.

And, over a decade ago back in highschool I used to write poems by first pulling cards out of an old crumpled deck of The Goddess Tarot by Kris Waldherr, and then writing lines inspired by each card. The Major Arcana card I pulled the most was Strength, the Orisha Oya — XI in that deck (I only learned much later that that was actually a bit of a controversial move on Waldherr's part).

So I went to the workshop yesterday at the QWF and it was wonderful to listen to Hoa Nguyen speak and teach us. She was very knowledgeable — polyptoton, polysyndeton, chiasmus, ... — and funny. The space created together was generative. I honestly felt pretty safe despite my own gargantuan awkwardness and ineptitude.

So what does this have to do with Creative Writing at Concordia? I guess the simplest answer is that, when a few other folks who also attended the workshop discovered I'd graduated from the program, they asked me pointed questions about specific professors and specific events and specific rumours. Every time I have to think about the CanLitAccountable Essay and its fallout, and Creative Writing, and my experiences, and the experiences friends and fellow students and writers have entrusted to me, it honestly takes a great deal of effort not to panic and to remain calm.

While I was pressed for some information by one of the participants, even after I asked not to be asked certain questions, thankfully I was able to avoid a true conversation (or was it a mansplaining argument? It was genuinely hard to tell what was happening...) since we didn't have much time for socializing. As we returned to the workshop after the lunch break, another participant gave me a weak smile in solidarity and offered their own reassurances that at least with all the garbage floating to the surface, it would force something to change, somehow.

I truly wish sometimes that I still believed that universities were capable of being anything other than abusive trauma machines. I fundamentally don't believe in their capacity to change. I don't believe that universities will ever stop protecting rapists, racists, and transphobes. I don't believe that universities are anything but fundamentally designed to recreate and uphold violent colonial, capitalist, racist, ableist, sexist, and cisheterosexual systems of power, and that structural change cannot occur from within. Creative Writing programs in North America in particular were designed, backed, and nurtured by the CIA, in case you thought I was being hyperbolic.

I am so tired of talking about these fucking universities and these fucking horrible professors. One of the fundamental cornerstones of oppression is that it's exhausting, it devours our souls, our own emotions, our lives. It consumes us by forcing us to continually have to pay attention to it. I just want to work on writing and not constantly be either retraumatized or processing my trauma in this barely-functional-unable-to-work-on-creative-stuff-or-grow-as-a-person kind of way.

I've been dealing with an abnormal amount of panic attacks in the past month, and in therapy we've been trying to actually figure out if I have specific stressors and triggers, something that's been difficult for me to pin down. The question I keep asking my therapist is "Shouldn't I have gotten over this already? What I've gone through is NOTHING compared to the experiences of my friends and loved ones."

And, of course, what I've gone through in my experiences with institutional CanLit is nothing compared what many of my BIPOC (Black, Indigenous, People of Colour) peers have gone through.

In the workshop, Hoa offered each of us at the table a card from her Mythic Tarot deck. I cut the deck in half and pulled the fifth of cups.

I have been reading tarot for a number of years but nothing came to me when I pulled the card. I felt as though I didn't recognize it. The figure on the cover of Hoa's card was calling at a retreating figure, one hand outstretched beseeching and the other holding a lantern. In this particular deck, the card depicts the Greek legend Psyche just after her betrayal of Eros, which shatters their relationship apart. The card asks us how we survive emotional trauma long enough so that we can one day reach a point where we can begin the work of healing. The card asks us to bring our attention back to the present moment, back to what we do have, back to what we can do.

Out of curiosity after the workshop was over, I pulled out my own tarot deck and fished through the cards for the fifth of cups. 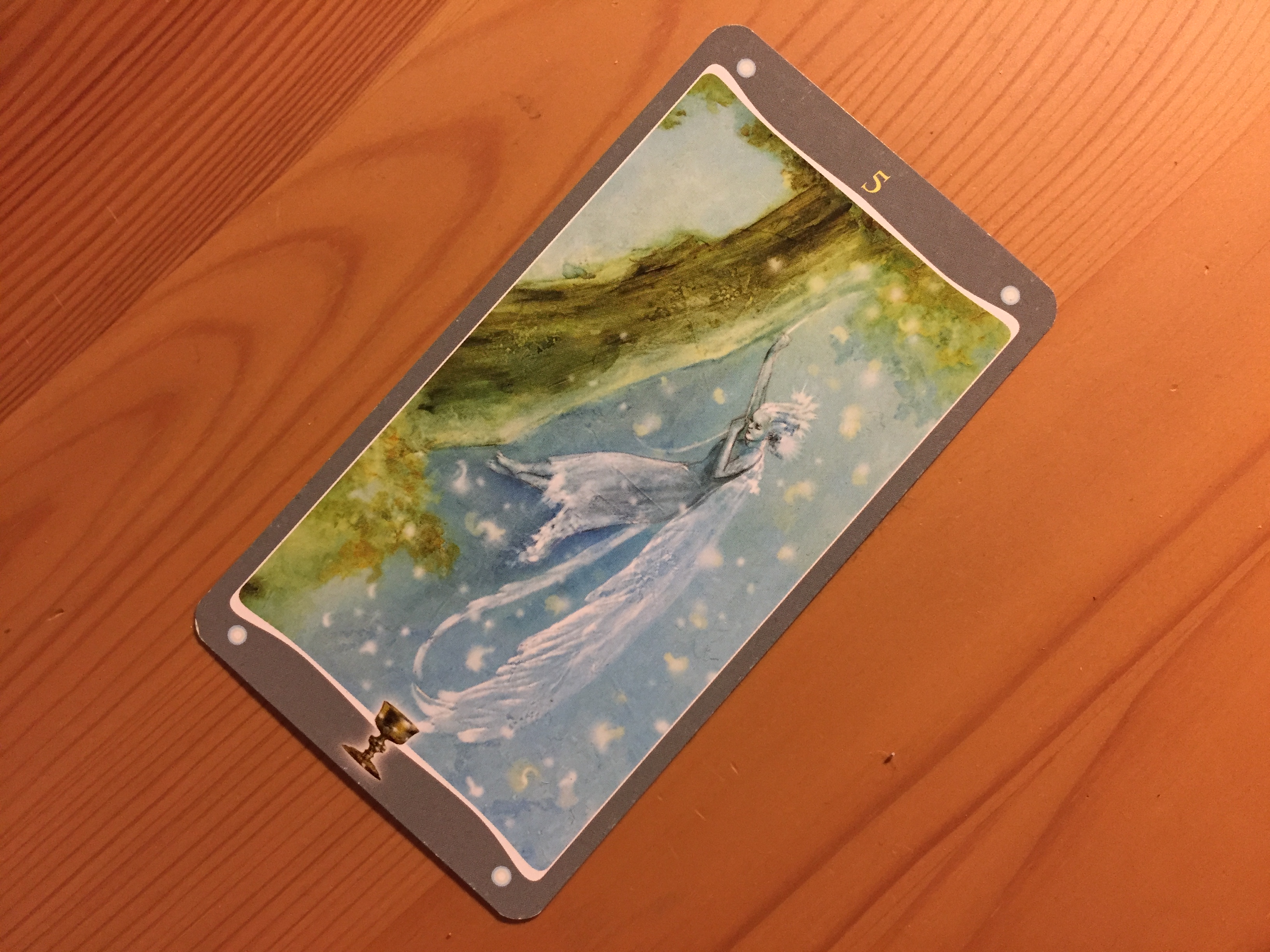 Hoa remarked to me that the fifth of cups often has falling imagery to convey loss and fear. I looked at the card and tried to remember how I read it. Usually, I read this card from my own deck as the representation of the famous saying "Nothing to fear but fear itself" — in other words, fear is always worse than reality.

It's funny how in the moment, in that workshop, my mind drew a blank even though in so many ways the card is a pretty solid representation of the trials and issues I've been facing for, well, years. Trying to work through grief, fear, angst, even trauma, long enough to survive it and finally reach a place where I can start truly healing. Or maybe that surviving is already healing in action. Healing — for me — doesn't end, so in that sense there's probably no beginning either.

I am going to keep trying to carve out space for myself, for the garden of poetry in my head, for the many, many people I care about and want to help lift up. I don't necessarily know how to do that succesfully or gracefully. Perhaps the key is to find (keep finding?) people whose writing I care deeply about, and who in turn care deeply about mine. In other words, friendship and connection.

While I was maybe a bit perturbed by the conversation about CanLit that occured during the break from the workshop yesterday, I still left Hoa's workshop feeling energised.

a full-blown ache keeps hands busy
a tea cup forgotten in the rain
how do I move beyond an apology
breaking night, uneasy days of half-open windows
cement softens
a breathing sponge, gathering
enough strength for one last frost-shattering breath
indecisive breeze catches your throat,
this city's face is the mountain thaw            false spring
survival hours slipping
a full-blown ache keeps hands busy
even at the end of grief
ropes taught
catch her eyes in the crowd
and pull

Essays on Concordia's Creative Writing program by former students and other writers: