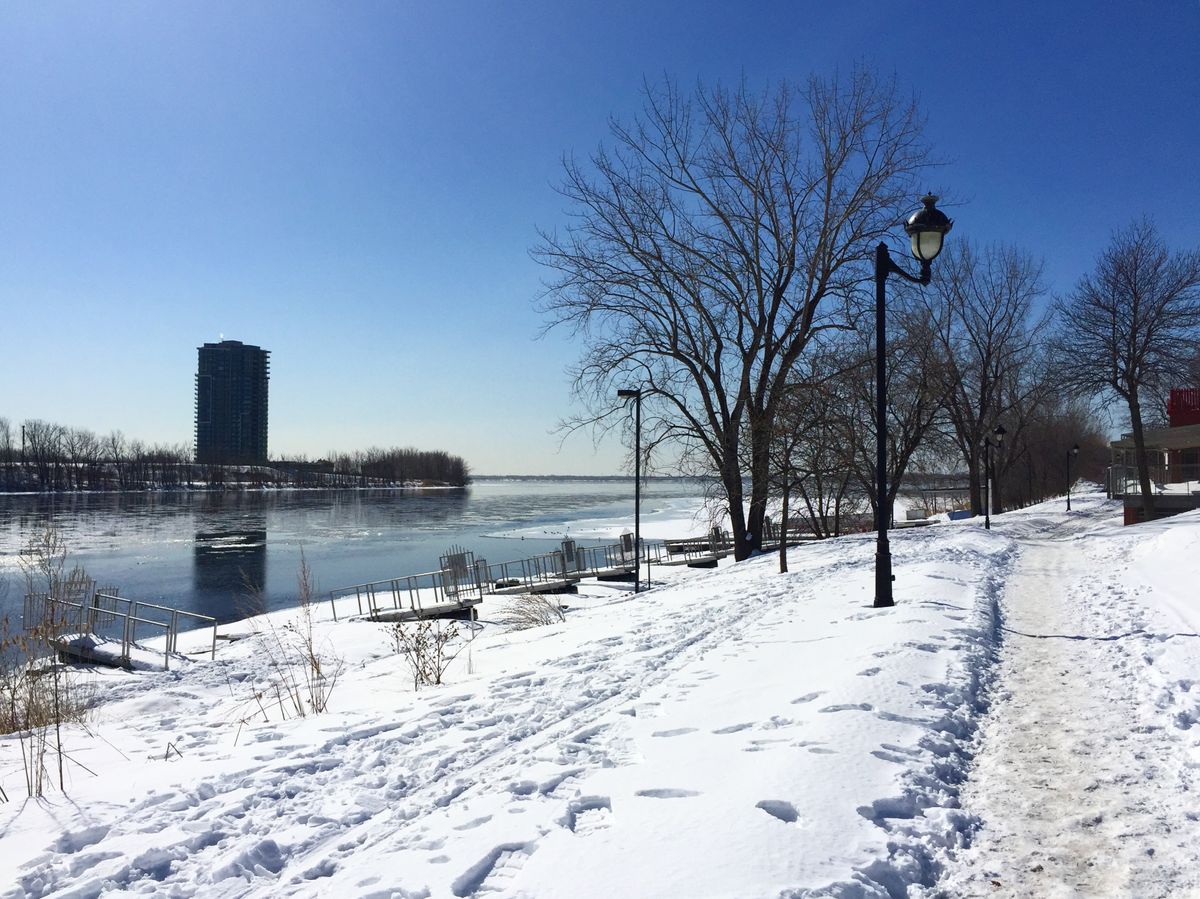 I was given a gift by my partner during spring last year: a miniature rosebush in a small pink clay pot.

The plant blossomed into a bright pink monster. I had to re-pot her twice until I moved it to a much larger bucket outside on the balcony from May until late September. I had never seen a rosebush in bloom in late September, so it was still something to behold. A sudden 16-degree drop in temperature from one day to the next caused all the blooms to dry out and die in a single day.

The wooden core of the plant still alive in October, I uprooted the rosebush once more. Guilt every time I heard an abrupt tearing where I tugged too hard, her thorns pressing into my fingers as I ripped her from one simulacra of earth to another. The rosebush never drew blood — perhaps my hands are coarser than they seem — and I finally moved the rosebush indoors, where she settled on the windowsill close to my desk, and in the fading light of autumn started losing half her leaves, too.

In December, indoors by the frost-coated window, she continues to grow, but slow, slow, slower...

There was a glorious day of rain during the first weekend of September. I went for a run, a pretty reasonable decision. I had straps to keep my knees in place, and stuff I put in my shoes to take care of the alignment issues in my feet and legs. The rain usually caused the cyclists to abandon the park for the day, so I ran everywhere, on all the paths, feet floating against the give of a gentler, soaked ground.

I stopped underneath the largest tree in the park, by the children’s playground, and pressed my forehead against the bark. I’m listening to the rain and the wind in the leaves of the tree above me. Dwarfed by a beautiful, gnarly giant, I smiled. I’m running, I’m relatively pain-free, and the soft ground is making the usually painful exercise much easier on my knees.

I ran an extra few hundred meters for the fun of it, before heading home.

The next morning, I could not move my right leg or my lower back, and there's a searing pain in my neck and shoulders. I was unable to get out of bed or to stand upright.

More than pain, I felt rage, and a lot of anxiety.

I was simply unable to leave my bed for several days, let alone the house. I could not bend my knees. I could not bend forward, or move my head from side to side. It felt like my back had turned to stone, like all the muscles of my right leg had become a solid leaden mass. When I moved around the house, it’s with the awkwardness of someone who can’t bend joints or stand upright. I had to cancel meetings and appointments, I cancelled on friends. I couldn’t. Fucking. Walk. I was both terrified that I injured myself running, even though I felt fine—better than fine—while running, and I was terrified that a knell was being sounded on my ability to move, to be athletic, to push myself. What had I done?

The rage wasn’t constant, but rather like an undertow, and gripping me by surprise at odd moments. Or not so odd—whenever I washed the dishes or did laundry or other cleaning or dealing with piled-up emails and I realised I would not be able to deal with them. I couldn’t stand. I couldn’t carry regular objects. I wanted to be able to go for a jog and not lose weeks of my life to bedrest and anger. I am also, very importantly, tired of freaking out my partner who puts up with me with a lot of kindness and care, but also, sometimes, fear.

My Abuela was born in Barranquilla and she likes to scoff at me when she watches me walking around in this winter weather wearing nothing but a sweater, my eyes sparkling like new snow.

We have a few days in late February that, thanks to climate change, are so warm that I wander our neighbourhood in the Plateau in a t-shirt. It's frankly bizarre.

My body hurts less than in the fall, though it still feels heavy and difficult to move during the long winter months. I try moving more. I try going to the gym and lifting weights. I try yoga. Something still doesn't feel right.

A dog arrives in March. We call her Myrtille, and the cat watches her arrival with equal parts consternation and suspicion.

The dog is miserable.

An animal behaviourist explains to me that when a dog is really scared and has no coping mechanisms and feels like they can trust no one, barking incessantly becomes their only way of coping with their fear, and it even becomes soothing to them.

I can't deal with the continuous barking. The dog days are measured in sound, when the dog is quiet because she has passed out from exhaustion, or when the dog is loud because she is awake and can't help herself. My partner comes home one evening to find me on the floor hyperventilating by a howling dog, she can't stop freaking out because the downstairs neighbours are throwing a birthday party. These are shabbily-built hundred year-old row-houses with no sound-proofing whatsoever, bass and music and shouts travel upwards in the brick and wood. I can hear with crystal clarity the conversations of the drunken men downstairs, though in my own panic and through the dog's howling I can't focus on anything. My partner goes downstairs to intervene, does not return for a long time, and the noises only intensify. I don't remember much. I couldn't breathe, something sitting on my chest, a howling dog at the door.

A few days later, we climb the mountain to walk the dog. On the Mont Royal, the mountain where I was born, I come to terms with the fact that we cannot keep this dog. I am too hurt to help her. She is too hurt to help us. We are all doing our best, especially the dog, and it's not enough.

I can't drive, but my partner pulls off the dozens of hours of driving into the heart of Ontario to return her back to the people who will keep her in the countryside. Both tired and running ragged, both worried about causing an accident. We drink so much coffee. I try not to sleep in the car, so we keep each other awake.

And there is a story there, in the dog's barks, one of abuse and neglect and maybe even violence at the hands of previous handlers and humans. What I mostly read is that she doesn't want to be here, she doesn't want to live in this city. And more than sorrow or the loss of an idea of having a dog, I understand that feeling, that feeling of being uprooted, of feeling like the very concept of home has been broken for you, maybe irreparably.

I can still hear echoes of the downstairs neighbours screaming threats of violence at my partner who went down to tell them to shut up that night of the party. The shouts have become the backdrop of every dream I've had since.

On our way back from Ontario, late at night on Easter Monday, I am afraid of coming home. I feel like the moment we cross the threshold of our apartment, a wall of anxiety will come crumbling down all around me, and I'll start having uncontrollable panic attacks again.

Finally home, my partner and I sit on the floor, so exhausted we can barely move. Our cat runs to the door, delighted to see us. Our little cat, who has been so brave in the face of a lot of uncertainty. We play with the little cat, and I feel something similar to relief. I am not hyperventilating. I still don't feel like I'm out of the woods, but I can breathe again.

The rosebush died in January, the heating and lack of moisture finally killing it. I still haven't thrown it out, instead I keep the little husk of bark and dirt on top of the laundry machine where the sun can still reach it. I water it from time to time. I know the likelihood of the rosebush returning to us, blooming once more, is ridiculously small. J'ai toujours du mal à lâcher prise. I keep watch for even the smallest leaf, the smallest regrowth.

I am continuously looking for the place where grieving ends. 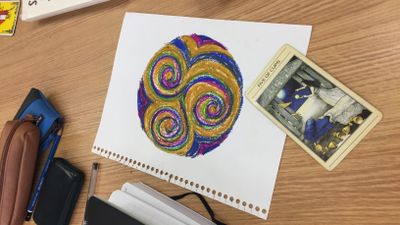 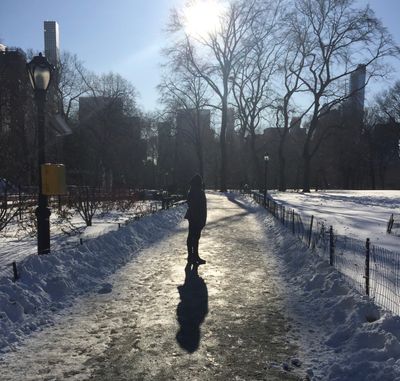