My sister and I step onto the bus, exiting the airport into a bright world with bleary eyes and exhaustion wrapped around us like cloaks. The bus pulls into Dublin and we listen to a pair of older Irish ladies behind us complain about the eternal construction that plagues Dublin every summer. I suddenly realise that the water through the window is the Liffey river, and that there are seagulls in the sky. 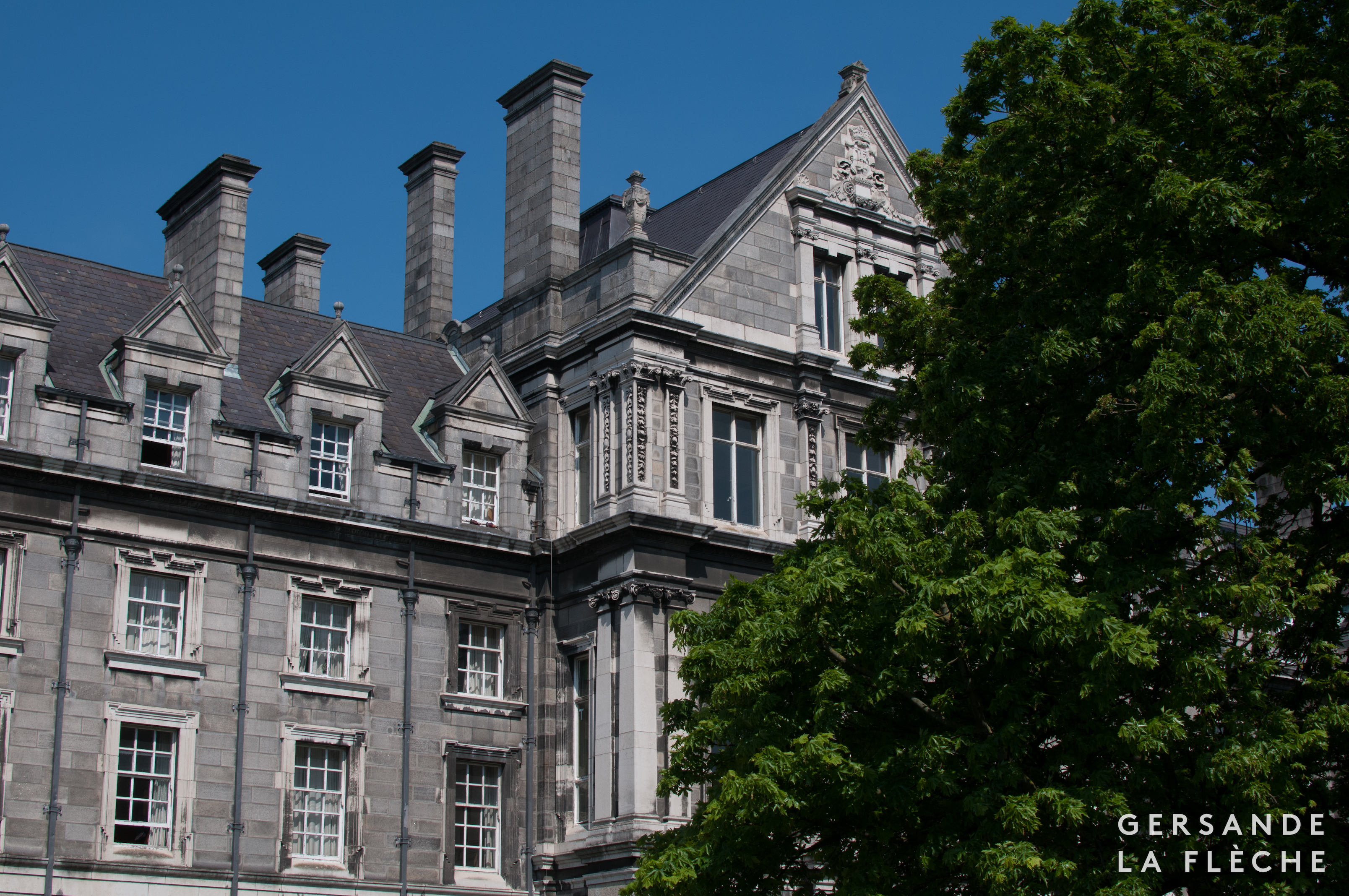 I walk through the Trinity front gate, stepping into the shadow of its arch cautiously. There is something austere, almost somber about the campus despite the bright light. 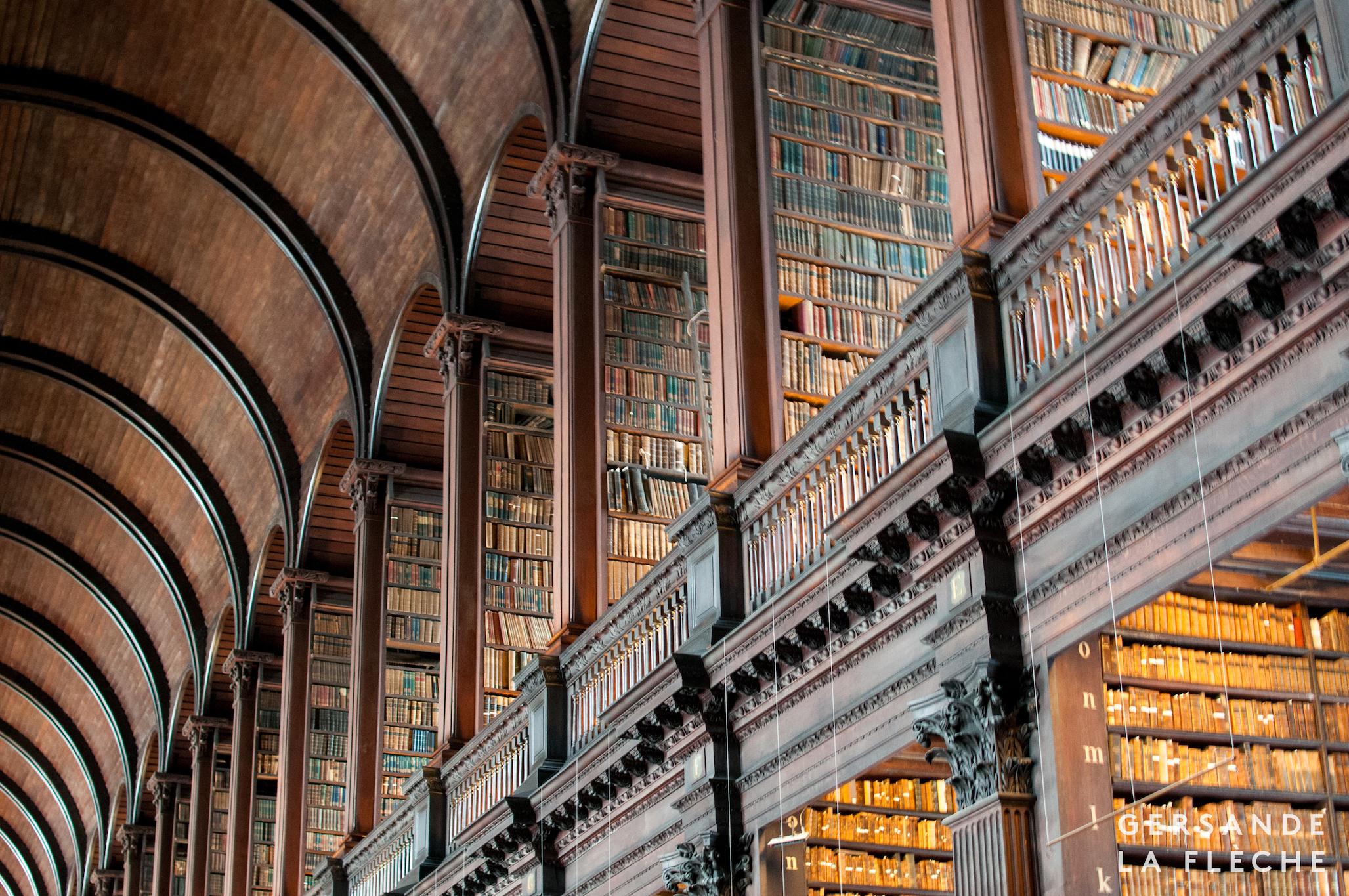 The Book of Kells is, simply put, a marvel. It’s corny as hell but I hold back tears from my eyes when looking at it through the glass in the dark room where it is conserved preciously. I think of the way that old wooden boats and houses, when left in disuse, fall into disrepair much faster. The same must be true of books, as I was once told that in order to preserve their integrity, every night some person must come to gently flip over a page. A Bible, a book of gospels, but so much more than that, covered in dust and light. Latin. A thousand years. Shadows. Illumination.

The Long Room above contains over 200000 books, and the smell of wood and old pages is sweet and heavy. Long shadows stretch out from the windows, dusty shafts of sunlight. My sister and I lose track of time just standing here. 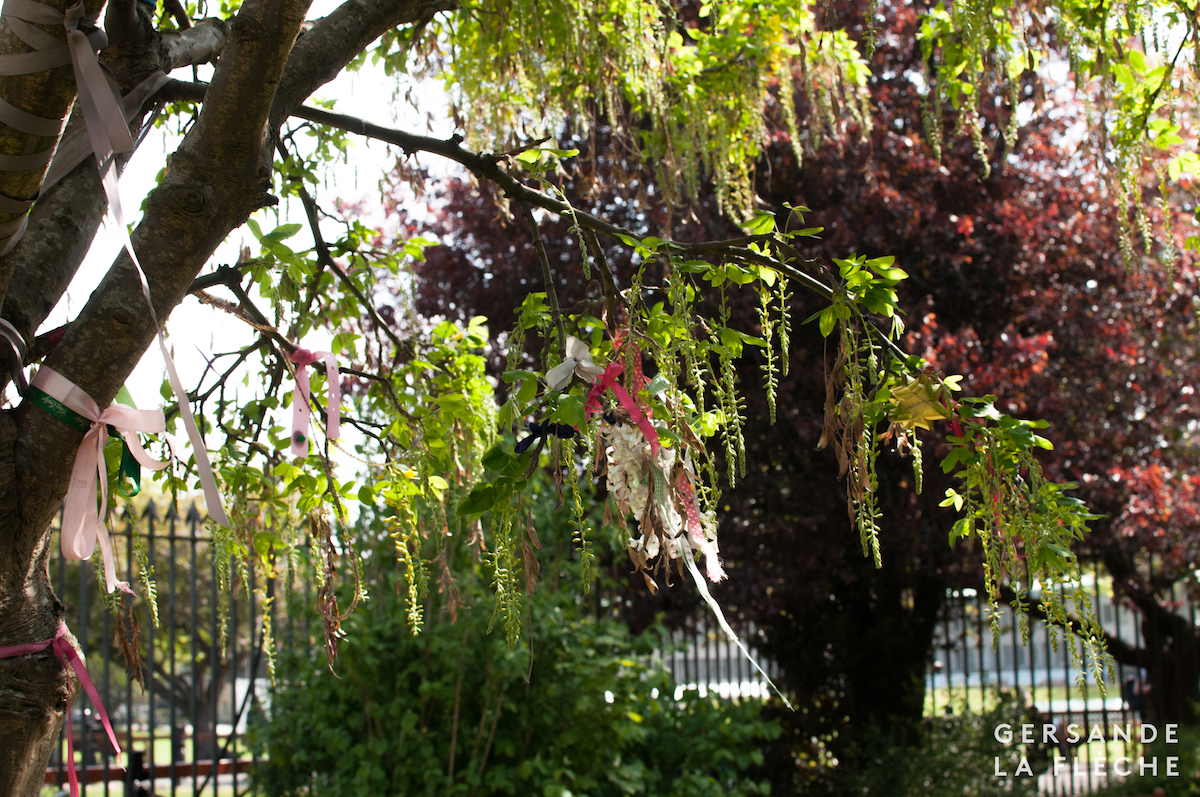 Tucked away in a small, overlooked garden, hidden from sight and the crowds, is a flowering tree on which students have attached all kinds of coloured ribbons. Underneath a blackbird attacks and swallows half a worm. 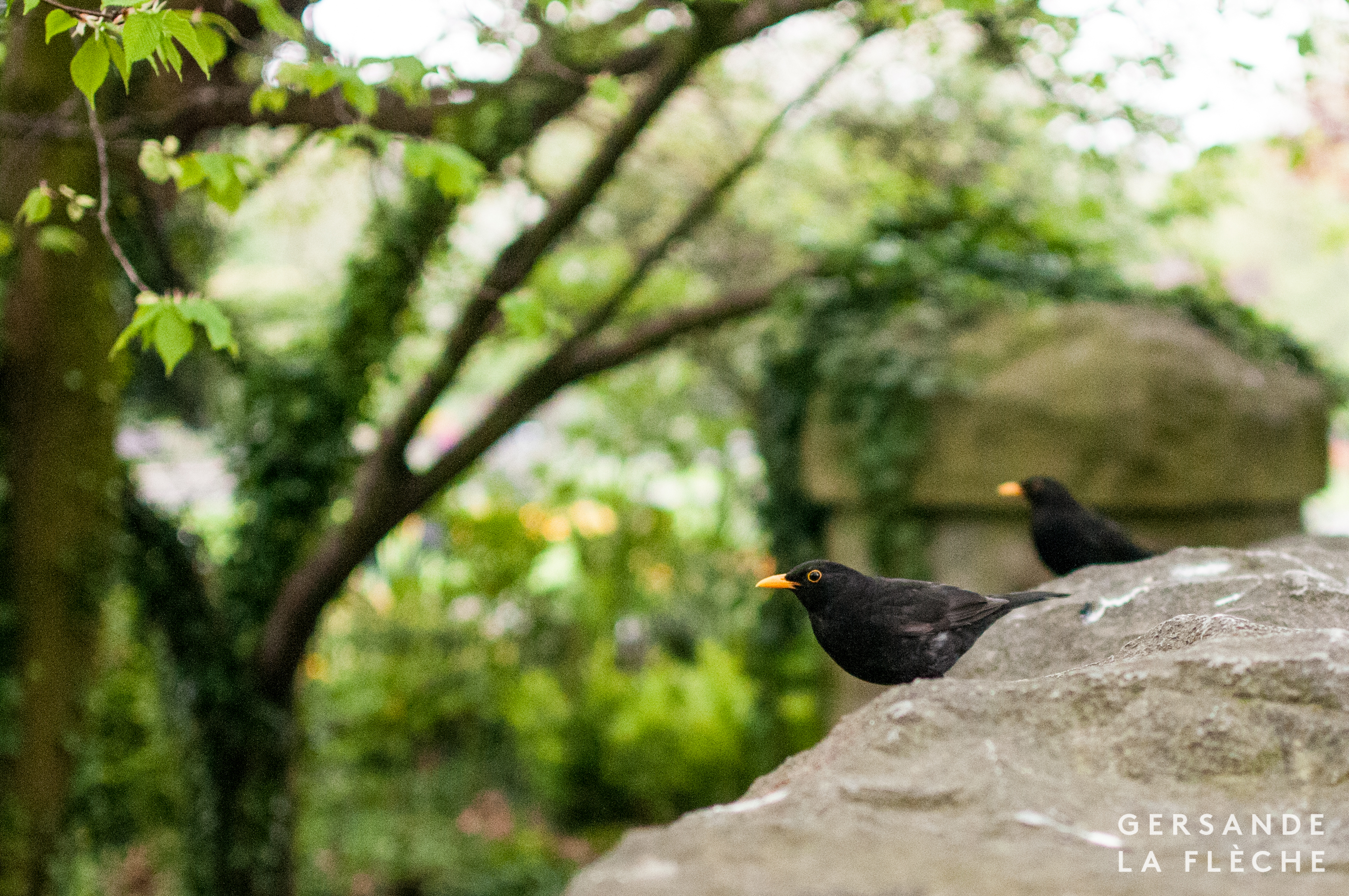 Ivy and lilac and cherry. Birch and aspen and oak and holly and weeping ash and hawthorn and laurel and weeping willow. In St Stephen’s Green blackbirds and ducks follow us on a small bridge over an artificial lake, where they hope we will feed them. A swan is fast asleep, gliding along the water, oblivious to the ducks arguing and swimming around it.

(I tried to take a picture of a duck wiggling its butt, but the photo was slightly out of focus.) 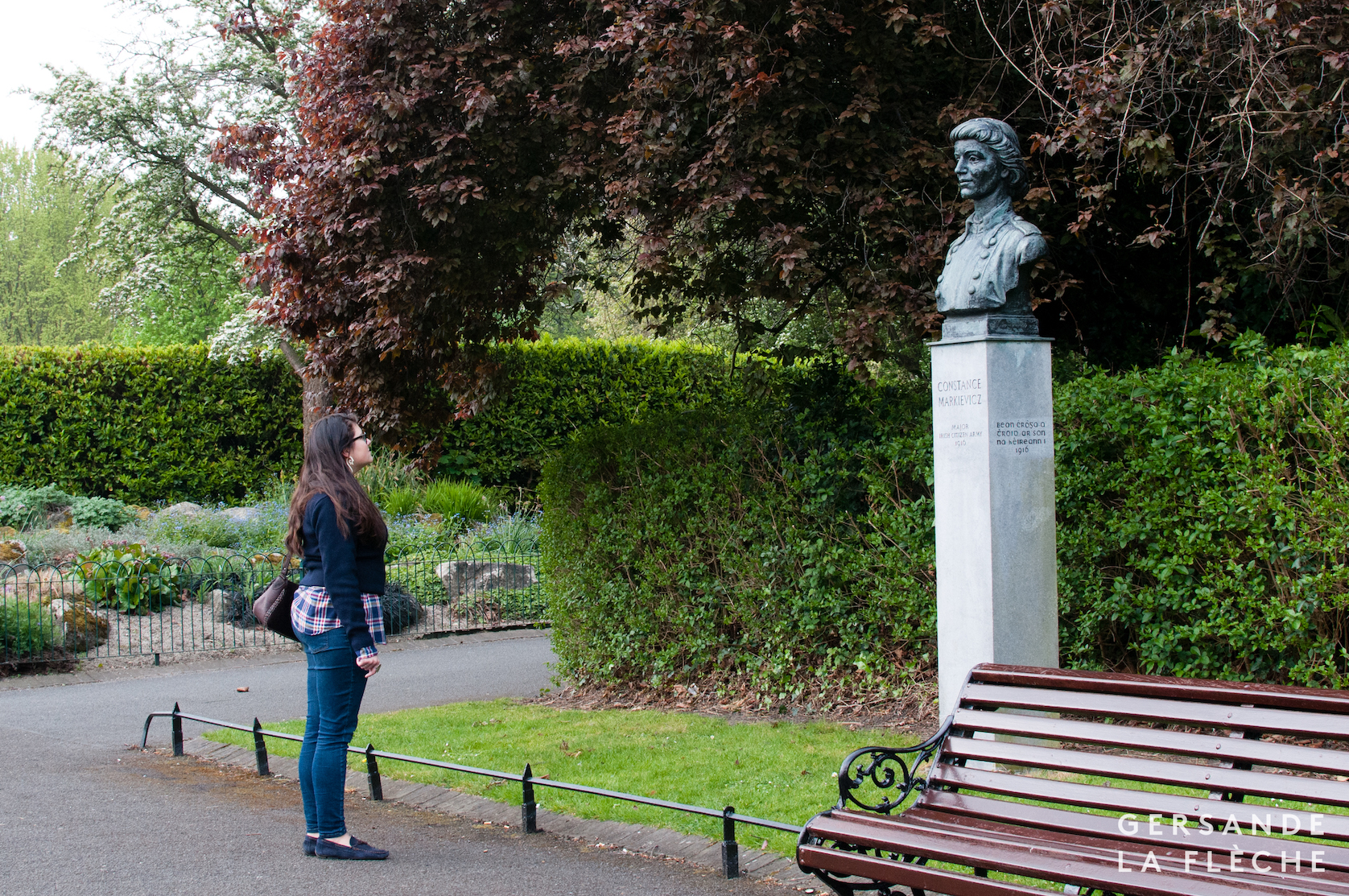 In 1903 Markievicz moved to Dublin where she joined Inghinidhe na hÉireann (Daughters of Ireland) and later founded, with Bulmer Hobson, Na Fianna Éireann (1909). Working with James Connolly, she ran a soup kitchen at Liberty Hall during the 1913 lockout, before she joined the Citizen Army. During the 1916 Rising Markievicz was appointed second in command to Michael Mallin at St Stephen’s Green. Upon surrendering, she kissed her revolver before handing it over to the British officer. (http://www.easter1916.ie/index.php/people/a-z/countess-constance-markievicz/)

Weeks later, during her military trial, a young man would describe her assault on British officers to the court — and again, she responded with blistering firepower. Browbeating the witness into tears, she savaged his testimony until he recanted and changed his statement. All the while she dared the officers standing around to shoot her. Years later, she’d become Ireland’s first elected female politician. While incarcerated. (http://www.rejectedprincesses.com/princesses/constance-markievicz) 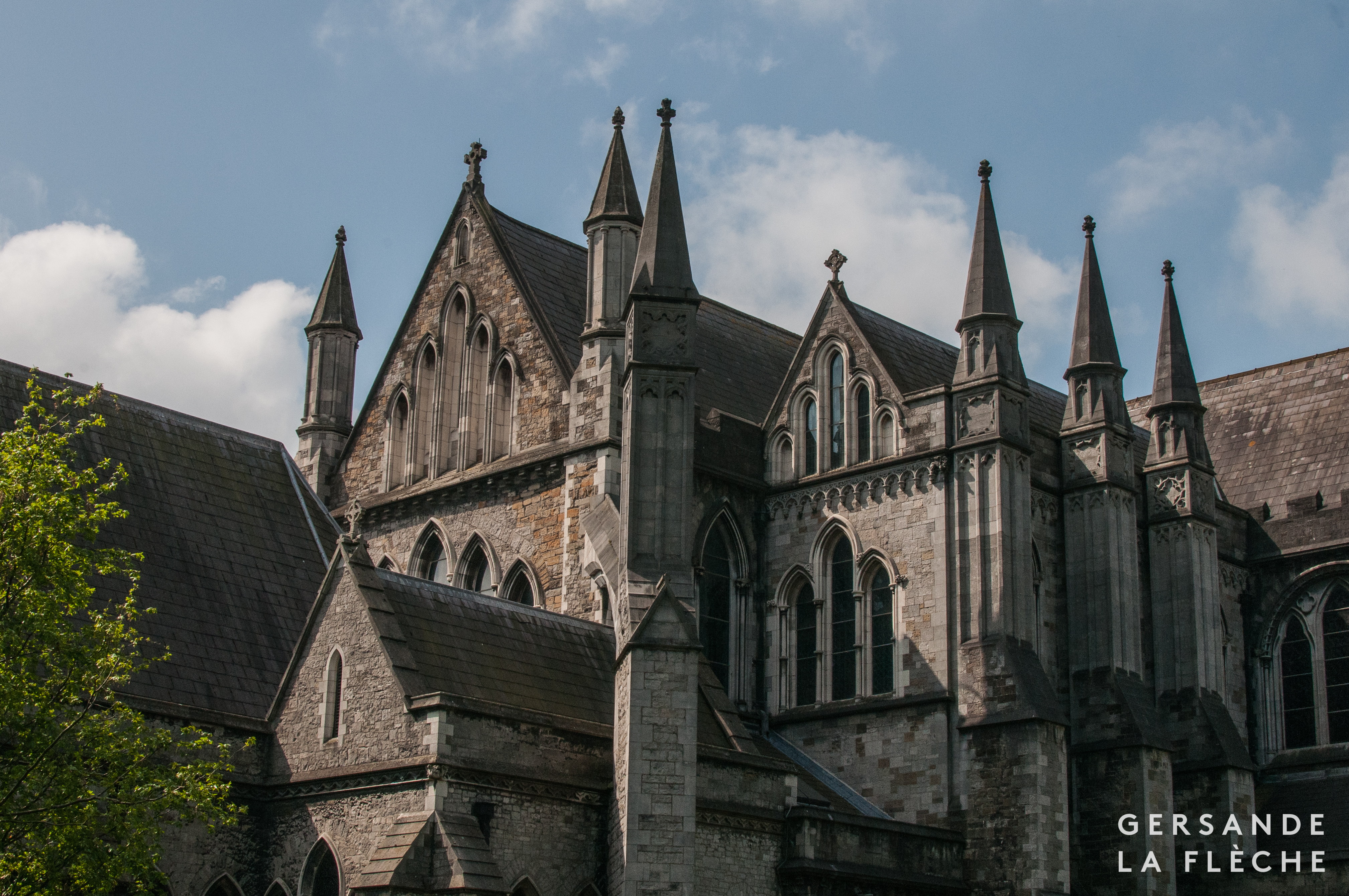 I keep forgetting to keep my shoes on. On the grass next to the Saint Patrick Cathedral I slip out of my dark blue leather shoes and spread my toes out against the green sun-soaked grass.

In the cathedral I light a candle for my dead grandfather. 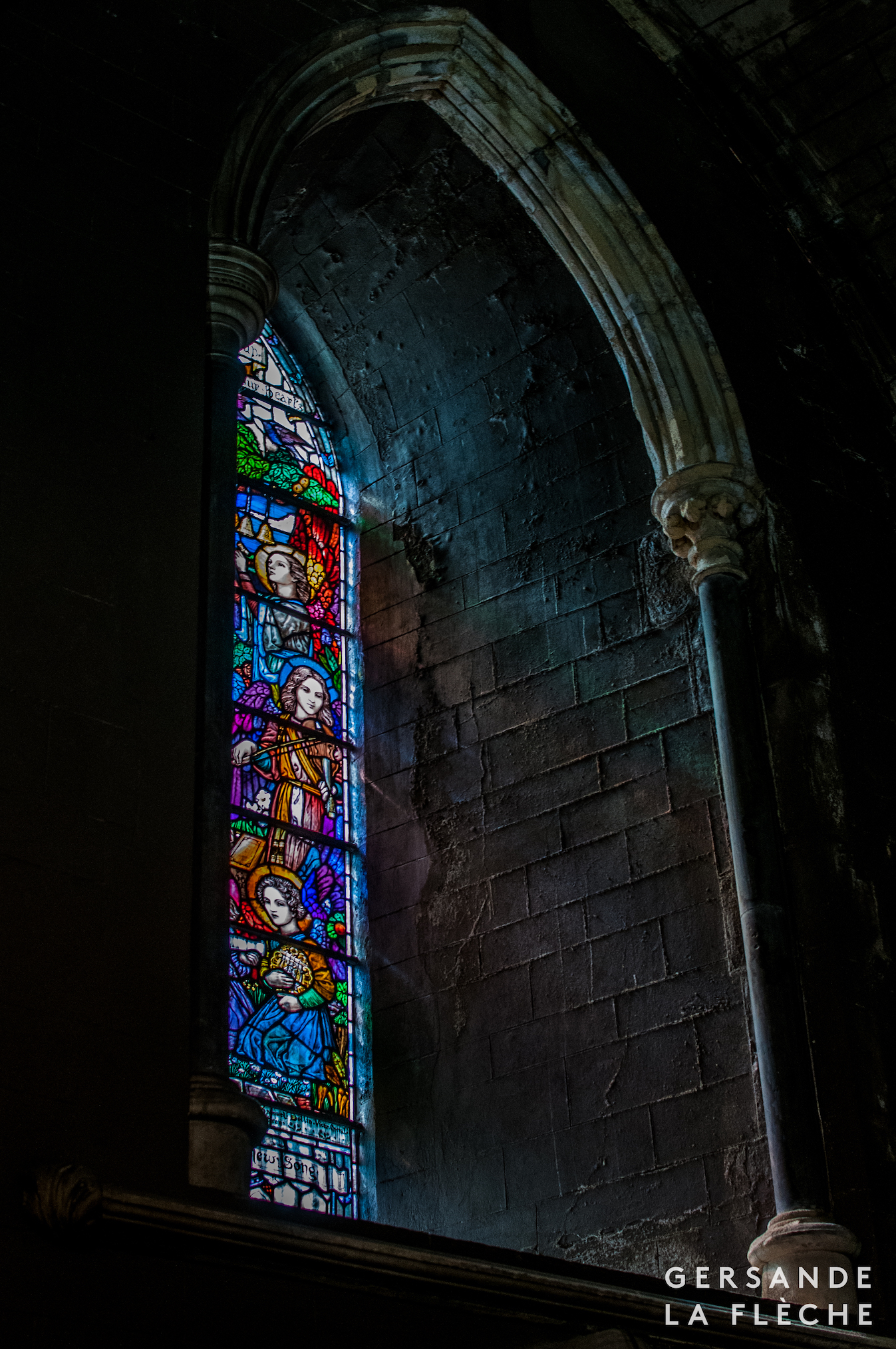 There isn’t much in terms of options for vegan or vegetarian food in Dublin, but what we do find is extraordinary. Umi falafel on Dame Street is particularly delicious. I discover nettle tea at the Cornucopia on Wicklow Street. A book stand on a busy, touristy pedestrian street sells everything from Marvel comic books to copies of Oscar Wilde quotes, and even carries a copy of Neil Gaiman’s Norse Mythology, which I have yet to read.

We stop over for a drop of whiskey at the Palace Pub. We walk along Grafton Street and I explain how the older buildings are mostly Georgian, not Victorian, in style. There are art nouveau flourishes to many of the buildings, especially the balconies.

On Kildare Street we decide to drop by the Archeological National Museum of Ireland where we visit the carefully preserved dead bogmen. My sister and I arrive at the museum’s opening: there is a period of a few precious minutes where we can sit with the bodies completely alone, contemplating the intactness of their skin, their hair, their flesh. One of the men’s hair is still red and curly, and the details on their faces and toes are alarmingly familiar. Skin-leather. Human leather. Small bodies, mostly. Easy pickings or willing sacrifices? Museums are tombs.

Later, we follow Westmoreland Street across the bridge over the Liffey to O'Connell Street. We rush to arrive on time at the James Joyce Centre on Great George's. The Georgian house that the Centre occupies has a beautiful courtyard in the back with a mural covering every wall, and a door—the door from No. 7 Eccles Street (Leopold Bloom’s door in Ulysses), an address which now no longer exists. There is only one tour today, the Dubliners tour. A small handful of us follow the guide up to Belvedere college, where schoolboys already linger on the streets in their uniforms. I jokingly ask the guide if the Belvedere Jesuits have finally come around to accepting Joyce, to which the guide replies, well, sort of. There is apparently a portrait of Joyce in the college now. But for a long time, the Jesuits would have nothing to do with his obscenities...

On Hardwick Street, we stop in front of another address that no longer exists, where Joyce lived as a young child with his family. On the far side of the street is George’s church. On the other side, closer to Frederick Street, the boarding house mentioned in Dubliners at number 4, remains, and at one time probably had a reputation for being a brothel. The guide jokes that Joyce probably appreciated the fact that one of his many childhood homes was closer to the rumoured brothel than to the church. 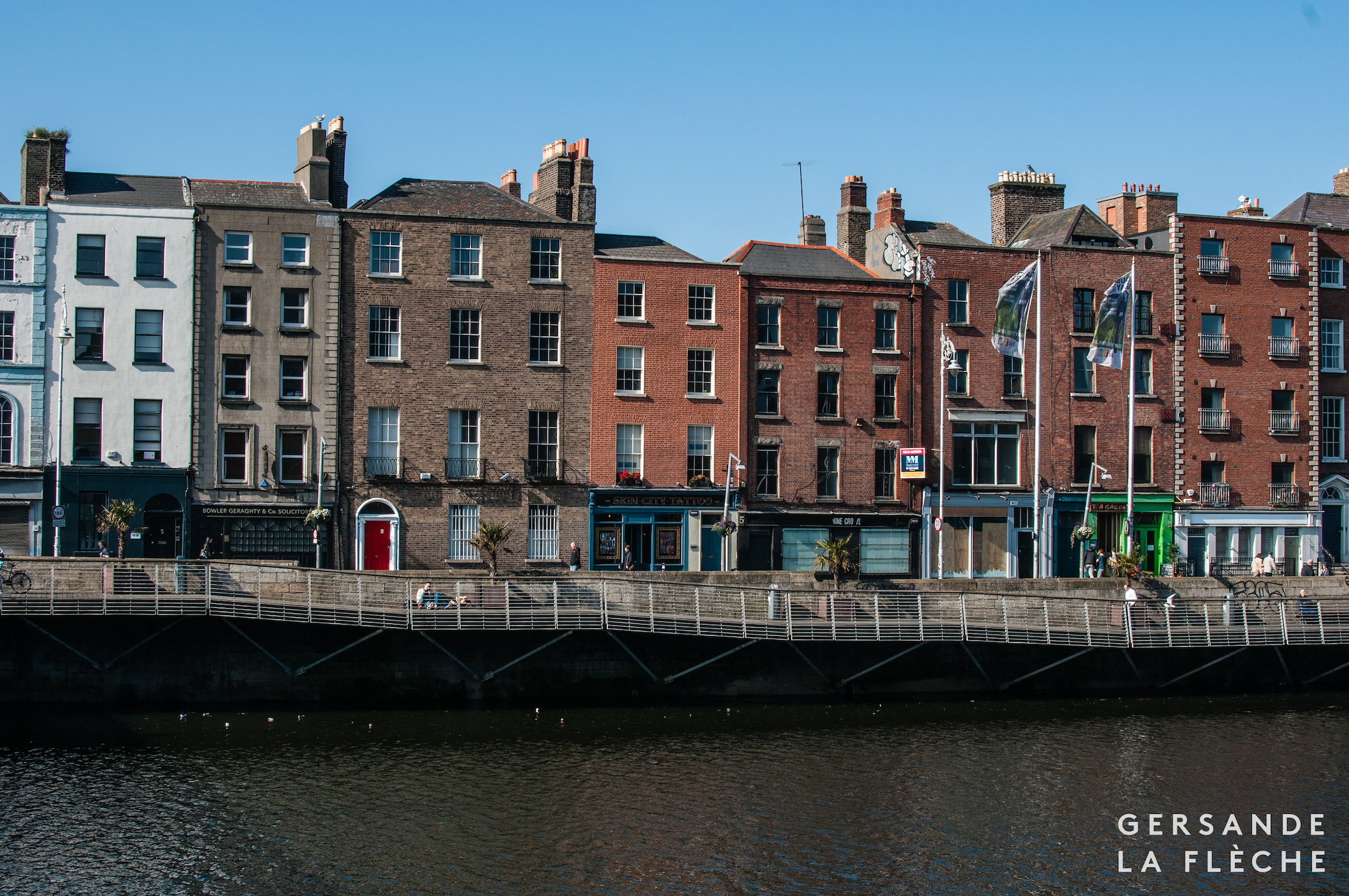 An hour later I'm walking down Parliament Street and crossing the Liffey again. I see Dublin's City Hall up the road. I'm limping a bit at this point, a strange stiffness in my left foot and right knee that sometimes occurs when I'm tired. I recognize Dame Street, and follow it a while again before ducking back into the smaller side streets, which are more interesting anyway. On one of these smaller streets I listen to two Lithuanian shopkeepers smoking outside a small shop, and when I look into the shop I see jewelry and leather-work and stationary that’s been crafted by hand in Dublin, so I go in. Inside, I find a small pouch made from a very delicate, soft green-grey leather. It’s the perfect size to keep jewelry safe. It’s not expensive so I decide to buy it. It’s my only purchase in Dublin that hasn’t been food or an entry fee.

Years ago, I found a holey stone (sometimes called Odin Stones) on a beach. When packing for Ireland I’d found it in my box where I keep all my earrings, and decided to keep it in my jeans pocket. When I leave the shop, it occurs to me that the pouch fits the holey stone perfectly.

"We are all born mad. Some remain so.” — Samuel Beckett Waiting for Godot

In the evening we go to the Abbey Theatre to see a production of Samuel Becket’s “Waiting for Godot.” We bought the tickets months ago, when we first dreamt up the idea for a trip to Ireland. The set design is just completely superb, and the acting is both effortlessly hilarious. Purgatory is a tragicomedy. During the pause between acts we drink coffee and eat honey chocolate.

We debate that evening which train to take in the morning. Finally, we settle on Galway for the next step in the adventure, and purchase the tickets online. A journey west, towards the Atlantic.

Our first chapter of the trip is ended, and I leave you with the last passage of Joyce’s Dubliners:

He watched sleepily the flakes, silver and dark, falling obliquely against the lamplight. The time had come for him to set out on his journey westward. Yes, the newspapers were right: snow was general all over Ireland. It was falling on every part of the dark central plain, on the treeless hills, falling softly upon the Bog of Allen and, farther westward, softly falling into the dark mutinous Shannon waves. It was falling, too, upon every part of the lonely churchyard on the hill where Michael Furey lay buried. It lay thickly drifted on the crooked crosses and headstones, on the spears of the little gate, on the barren thorns. His soul swooned slowly as he heard the snow falling faintly through the universe and faintly falling, like the descent of their last end, upon all the living and the dead.

PS: To follow my Ireland adventures, check out my instagram tag (yes, I’m aware of the typo) #gersandetmorganeenirlande  or my 500px gallery (with even more images!) https://500px.com/gersande/galleries/ireland-2017.