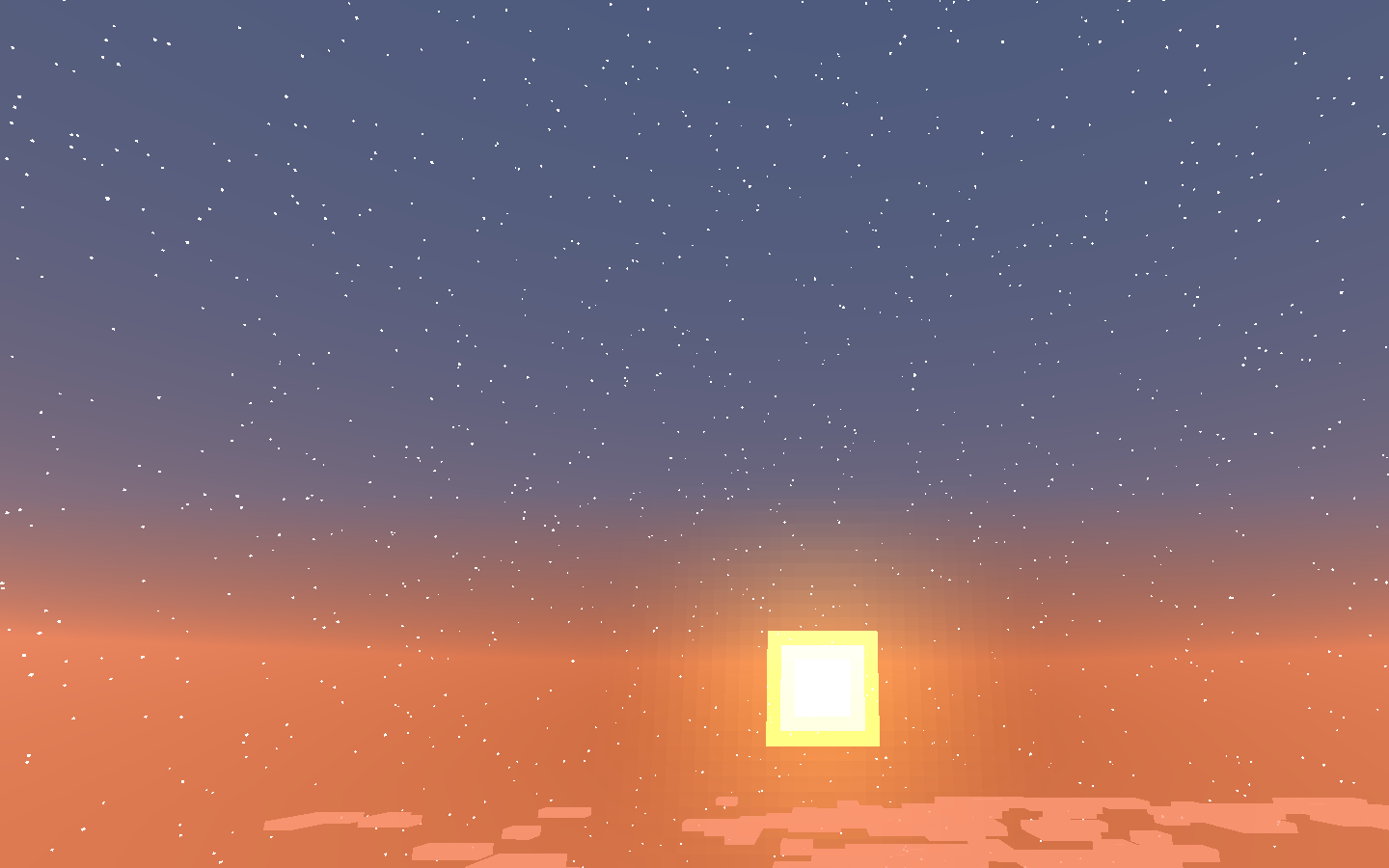 Civilizations are born and die within Minecraft. —William Brownridge

On my Linkedin, one of my top profile bylines is "Minecraft Phenomenologist." I've worked on several projects in Minecraft over the years, some documented and organized by the university where I did my undergrad: notably the work I did for the Amplab as well as for a conference at Concordia called The Building Blocks of Life: A Minecraft Colloquium (see my presentation slides and notes here). I've also worked on my own server project, something my partner and I whimsically called the Arda project—suffice to say I've played a lot of Minecraft.

In fact, I've played a lot of all sorts of videogames over the past few years. My relationship with them has changed, especially as a result of studying them and working with them in university. And while I do invest quite some time into playing many different kinds of videogames, I don't think any game has given back as much as Minecraft has. 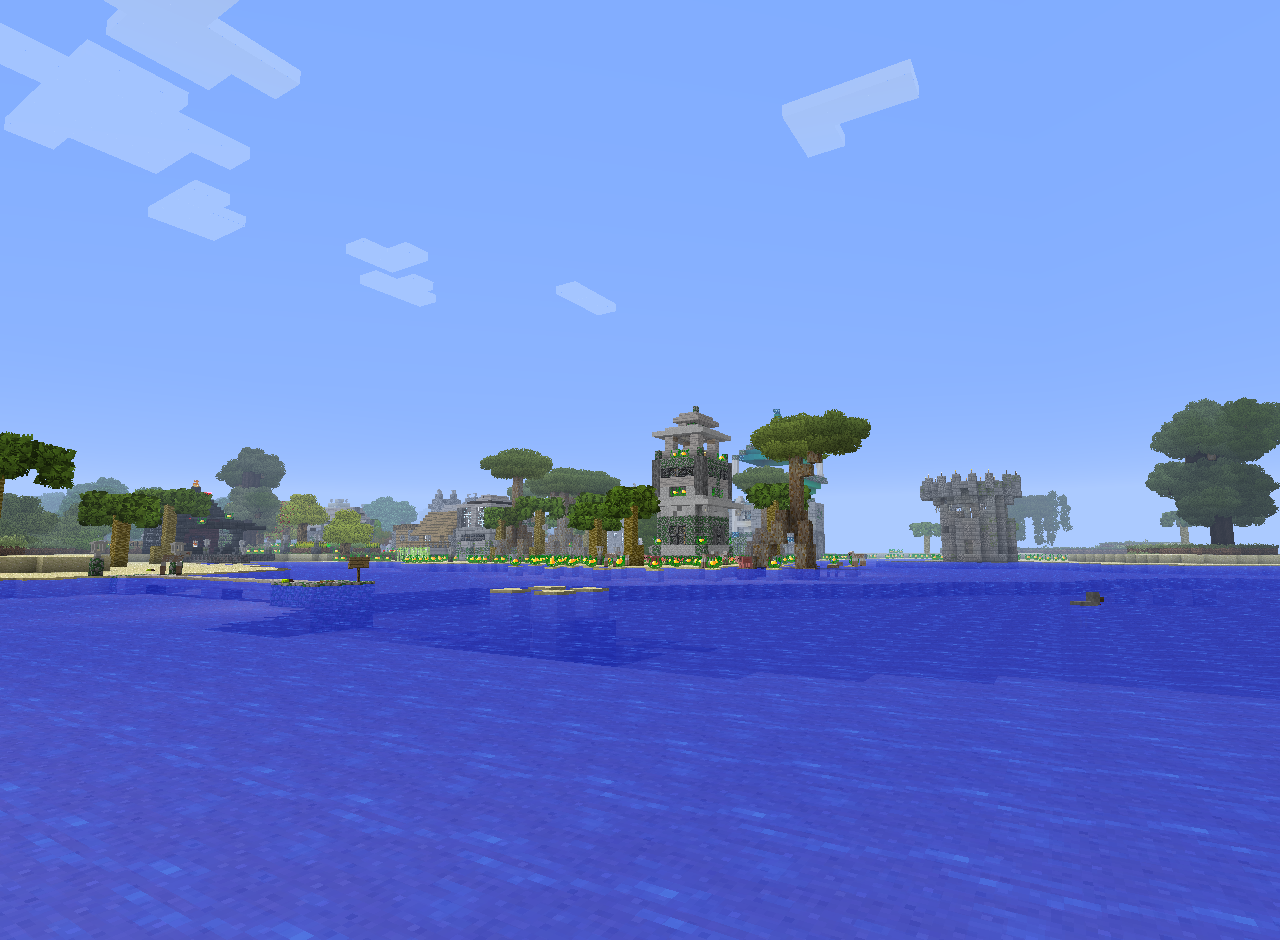 Though I've played my fair share of MMOs, I actually tend to prefer playing single-player games—except for Minecraft. I only have ever really played Minecraft in multiplayer-mode. Because of that and because of how I've always ended up playing on servers where I knew most of the players offline, either for class, for a project, or for fun, it's ended up creating a myriad patchwork of interesting human experiences—and a heck of a lot of stories. From the beginning, I was super interested in playing Minecraft with other humans because seeing what other humans built in Minecraft was not just to gain insight into their personality or aesthetics, but to gain insight into the way they see the world and build with it.

The biggest surprise, however, to come out of the experience, was being interviewed and then featured Gina Haraszti's documentary webseries Your Place or Minecraft.

I said this on Twitter a few days ago, but what I find really interesting about Your Place or Minecraft is how it's not really about Minecraft, though it's certainly about playing Minecraft. It's actually mostly about people.

The documentary takes place on something we who played there called the mLab server, a server run out of a university research centre and managed by Joachim Despland. I played on the mLab server (it sadly no longer exists) for well-over a year, I believe, rather consistently. I built over twenty bases and little outposts, and eventually moved into a corner of the map which at first I called Witch Mountain. I did eventually leave Witch Mountain for another base before I stopped playing on the server, but for a while there Witch Mountain was my crowning achievement.

Watching the documentary, as someone featured in the documentary, it strikes me how so much of it is so familiar. Even after all this time since I stopped playing, I end up spending ages looking at the scenery behind the interviews, trying to piece out who built what, and at what point in the chronology of the server was the screencast recorded. I'm actually surprised by how much I remember about the players, what was used to build what, and the stories. Even the drama comes back to me.

I remember especially well, watching the documentary and listening to that soundtrack, the days I played for hours in solitude with nobody else online, wandering a built-up landscape like a survivor must feel wandering a post-apocalyptic world, looking for signs of recent inhabitation, or community.

It's a privilege to be featured in this documentary and I'm very grateful to Gina and her team for putting it together and placing it online in its completion. It's a real joy to watch it, and to see things about the mLab server I've never even seen before. I like each episode a lot—I also like how some of the episodes inform each other, despite each episode having been recorded individually and separately. 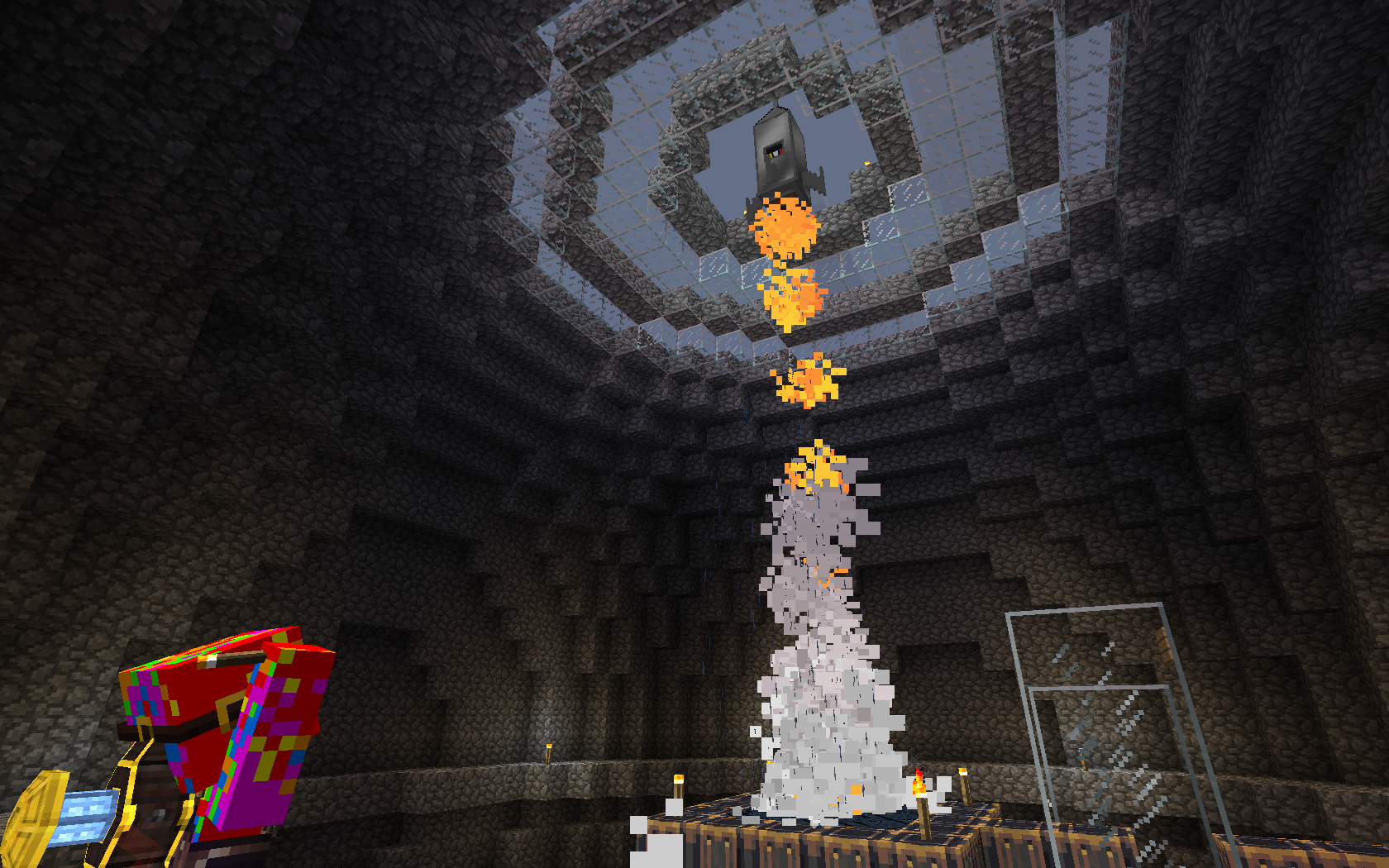 Watching a shuttle launch for the first time with Gina.

An episode that really struck me was Isaac's episode Where Space Is Time. Watching Isaac follow the rail that connected all the various bases of the mLab server was really interesting. He was one of the more mysterious players on the mLab server (and one of the most powerful players who wasn't also an operator—most evidently demonstrated by the fact that he kept a pet Wither at his base) and someone I never ended up getting to know very well. Getting to hear his take on the mLab server was fascinating, not to mention seeing everything that he built using Galacticraft, a mod I never ended up using at all.

So every block that you see in Minecraft—and they're all like one by one, they're units, cubic unit of something—you can assign it (...) a unit of time. So you can say every grey block that I'm looking at right here is one second of time and working backwards from that, if you sort of look at how many blocks have been excavated you can almost calculate how long something would have taken to dig it. So instead of thinking about it in terms of space, you can think about it in terms of time. And just be like: "Jeeze, that took forever." —Isaac Lenhart

I invite you to watch the documentary series Your Place Or Minecraft at yourplaceorminecraft.com—not just because I'm in it wreaking havoc with chickens—but because it's a really unique piece of filmmaking, showcasing a small glimpse into all the human stories and projects that made the mLab Minecraft server what it was: an ephemeral digital landscape that was lovely, thoughtful, and unique. 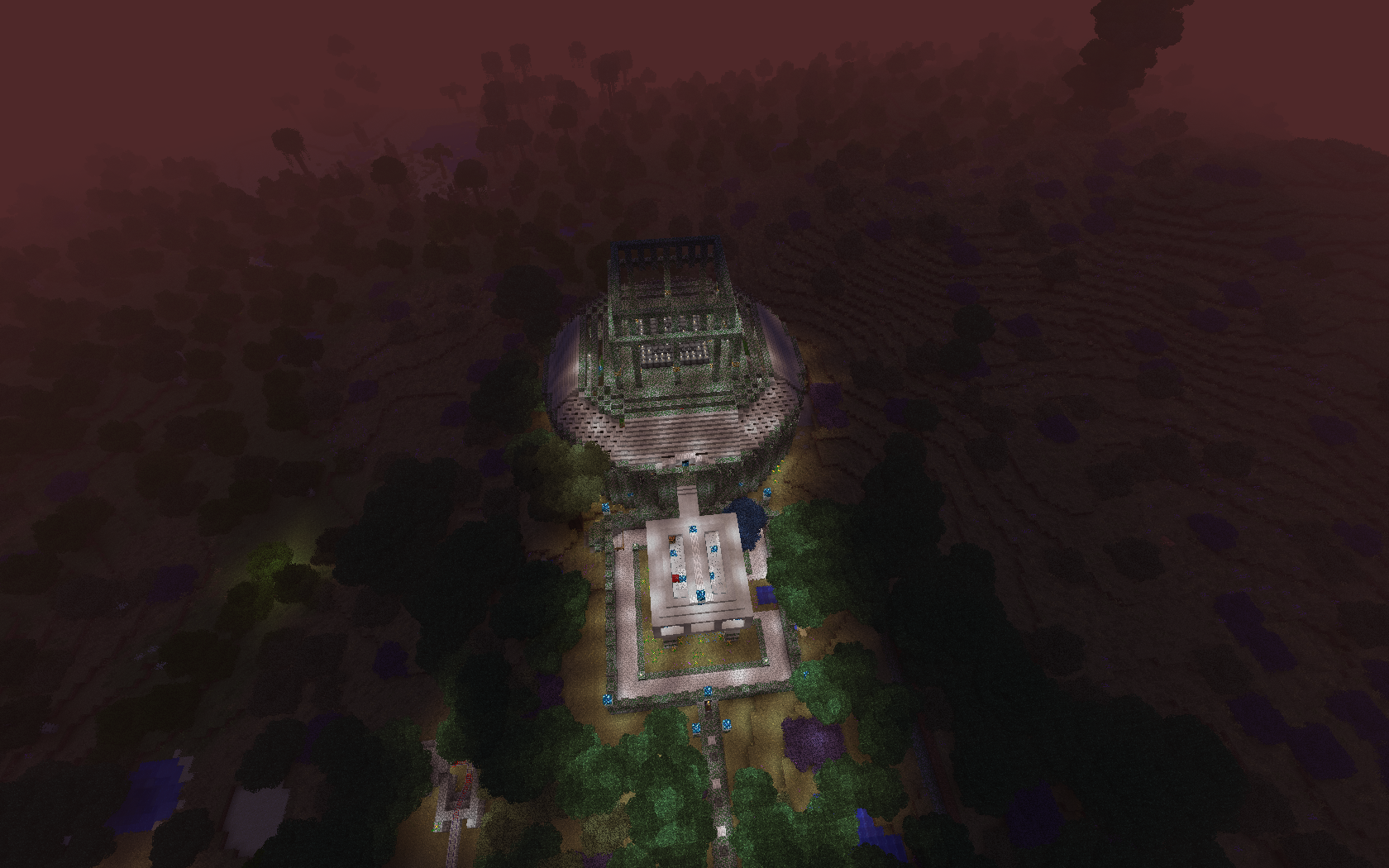 My last base on the mLab server, a massive circular garden made out of moss stone. (Yes, I know.) 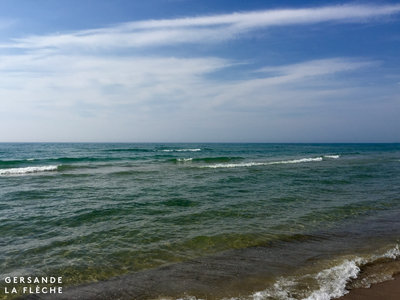 Waiting at the high water mark

Life updates: a new apartment and some herbalism — July 2016 in a nutshell 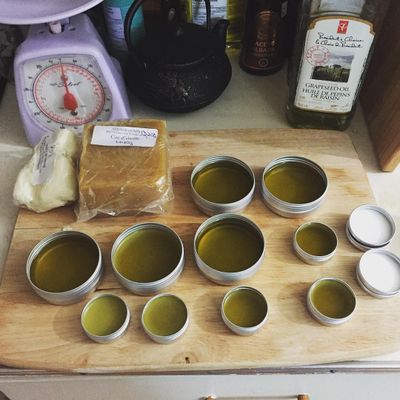