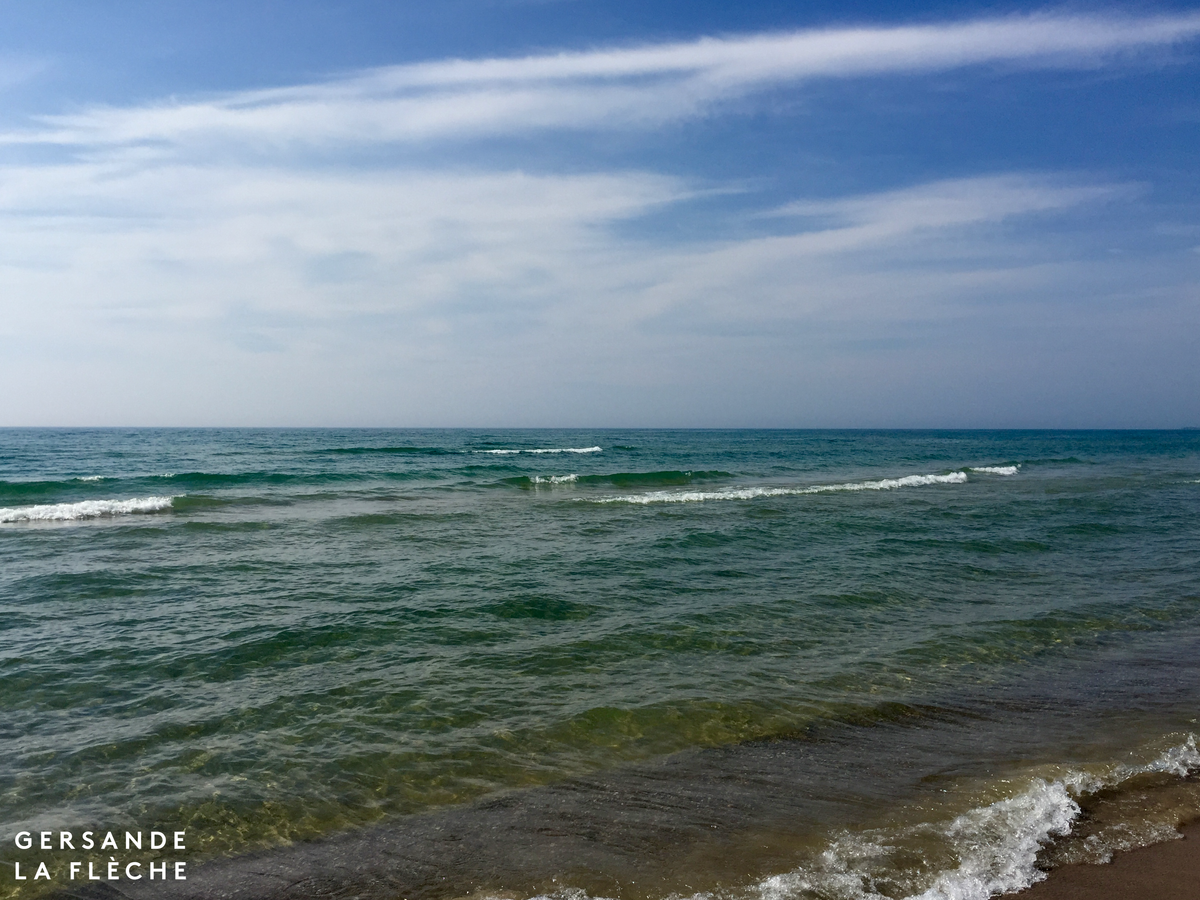 Waiting at the high water mark

On a school trip when I am ten years old, I find myself on the littoral—where earth and water meet—of the river in Tadoussac, listening to a teacher asking the gathered sixth graders how we can tell that we are no longer just on the Saint Laurent.

Without thinking, I crouch down on my pink and grey running shoes, submerge my hands in a small pool created by rocks and the tide, make a cup between my palms, and drink the river.

The water is salty. 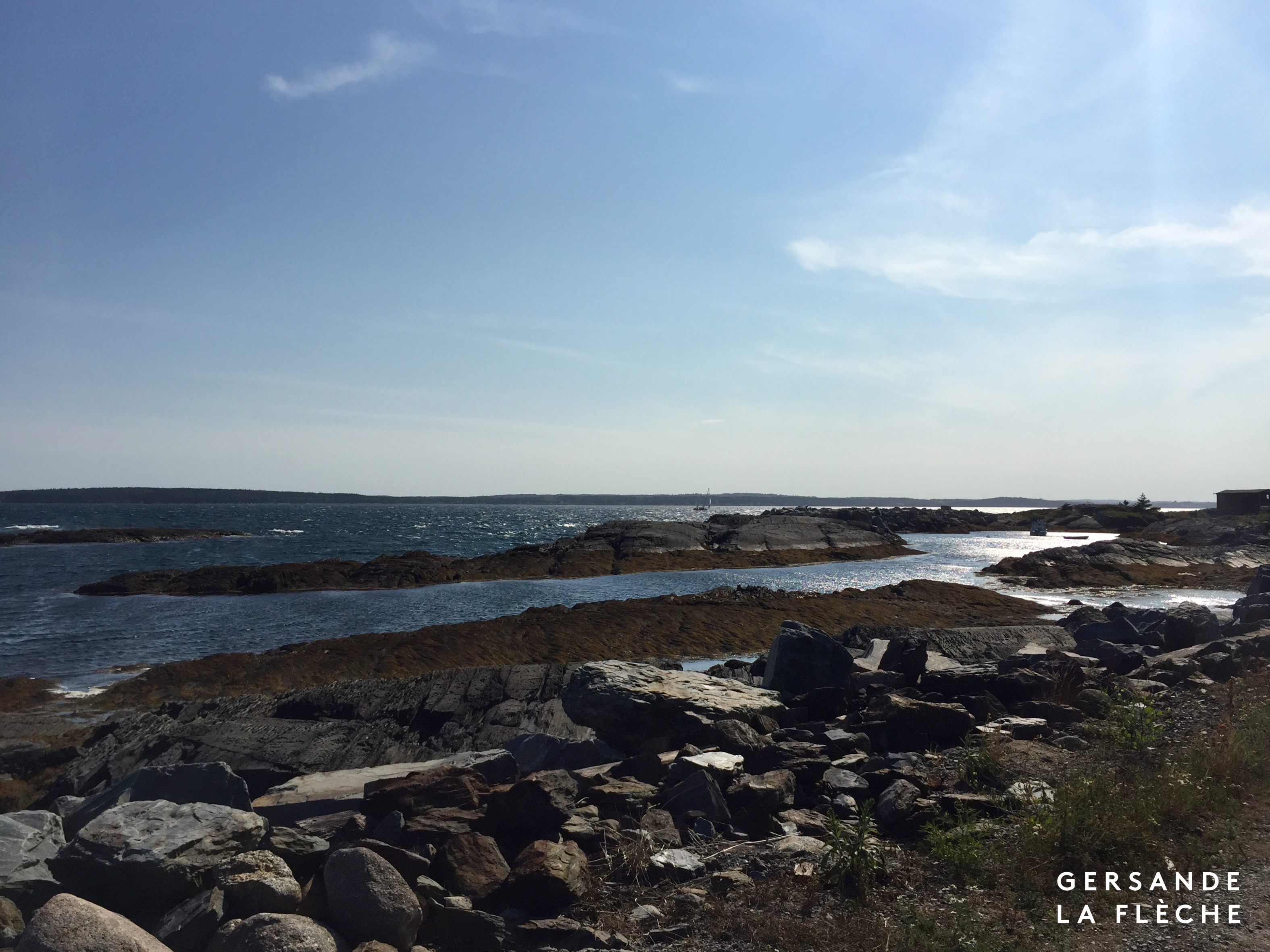 One day I'm in my brother's car, driving down the coast, and the windows are rolled down, guitar music blasting from the speakers and still barely audible over the roar of the ocean wind. A bunch of us cousins are piled into his car, getting thoroughly lost for a few hours along the blue rocks falling into the Atlantic. The waves from the ocean just beyond the country highway fall with a steady rumble against rocks at low tide.

I hide out on the Atlantic shore for weeks at a time, filling my lungs with salt, southern winds and fog. It will sustain me for the year to come back in the city where I am bidding my time until I can live in an environment less polluted and less frenetic.

After a day of rain the sea smells different. Brackish water reawakens long-ago memories of discovering what happens when a river wide like the sea actually begins to mix with the ocean.

Water is memory, smell and taste familiar and reassuring and replenishing. Even the sound of it is a song—rainfall, currents, waves, ruissellement.

I grew up on the Saint Laurent, and know the shores between Montréal and Rivière du Loup well. Living on the river in a city is an experience of disconnected proximity, since I have never swum in this river, and apart from that one experience in Tadoussac, I've never tried drinking from this river.

One day I read A.M. Klein's The Breakup, a poem about the Saint Laurent in April, and I realised that I have never heard the ice fracturing and cracking in spring. Noise pollution from the city all but drowns it out. There is now only a poem to remember it for me:

But it will come! Some dead of night with boom

To wake the wagering city, it will break,
will crack, will melt its muscle-bound tides,
and raise from their iced tombs
the pyramided fish, the unlockered ships, [...] 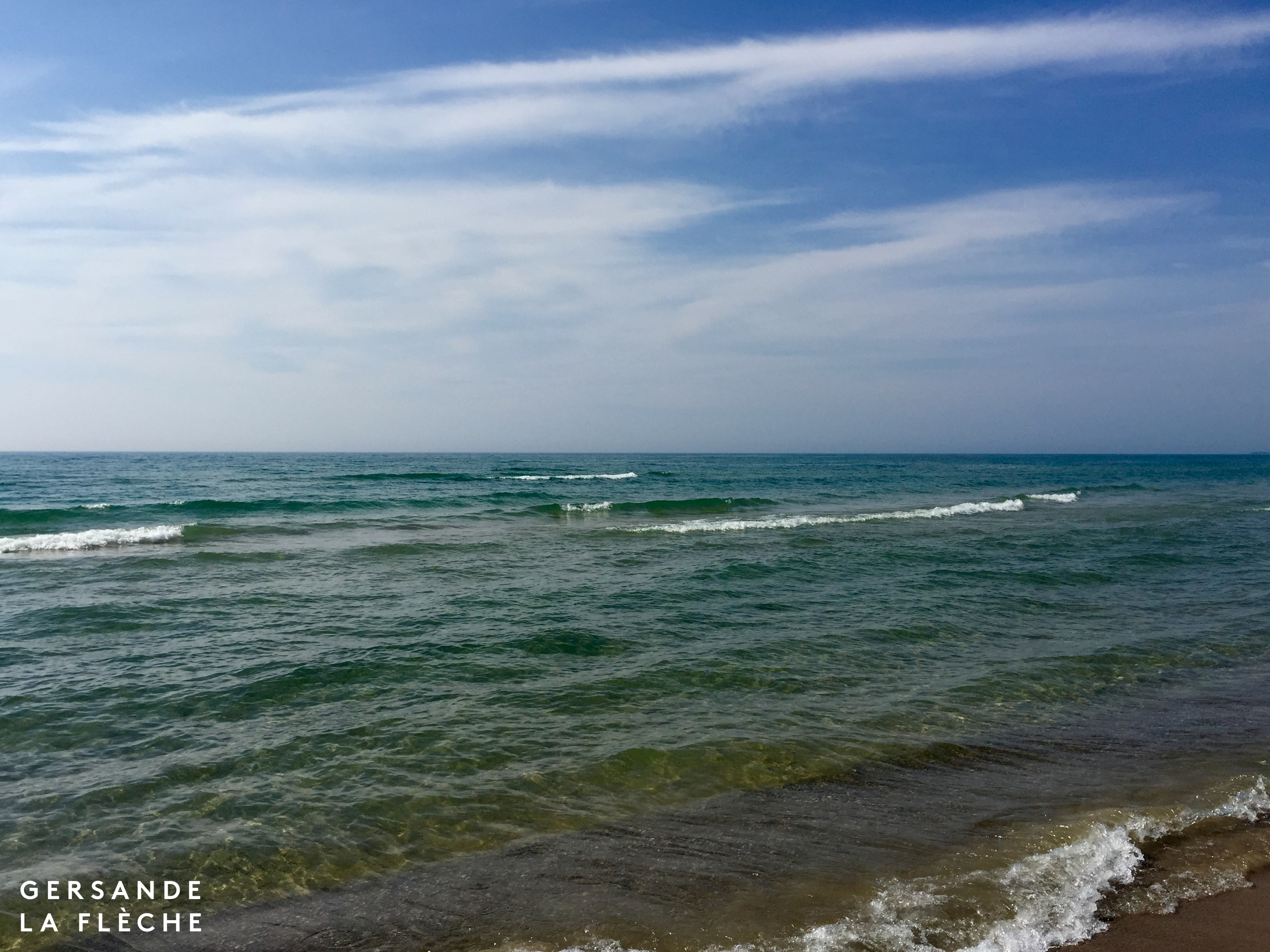 I try to make going to the ocean a yearly pilgrimage—the ocean feels like home in a way no other place does.

For Labour Day this year, I had the chance to come to Lake Huron, to Saugeen First Nations land.

I was not prepared for this lake to feel so much like an ocean.

Lake Huron has no tides, no salt, no crabs, and no seaweed. Her water is sweet. When the wind travels from the south, it carries with it the smell of kilometres and kilometres of water, but there is no smell of salt hanging in the air. The lake is so massive that, like on the ocean, there is no opposing shore visible on the horizon.

I step into this immense sea of fresh water shyly. I understand the Great Lakes in theory, but I still feel wonder as I stand in Huron's wake.

There is so much water in Canada.

It strikes me, very suddenly, though I can't see it with my own eyes, that somewhere on the other side of that southern horizon is Flint, Michigan. 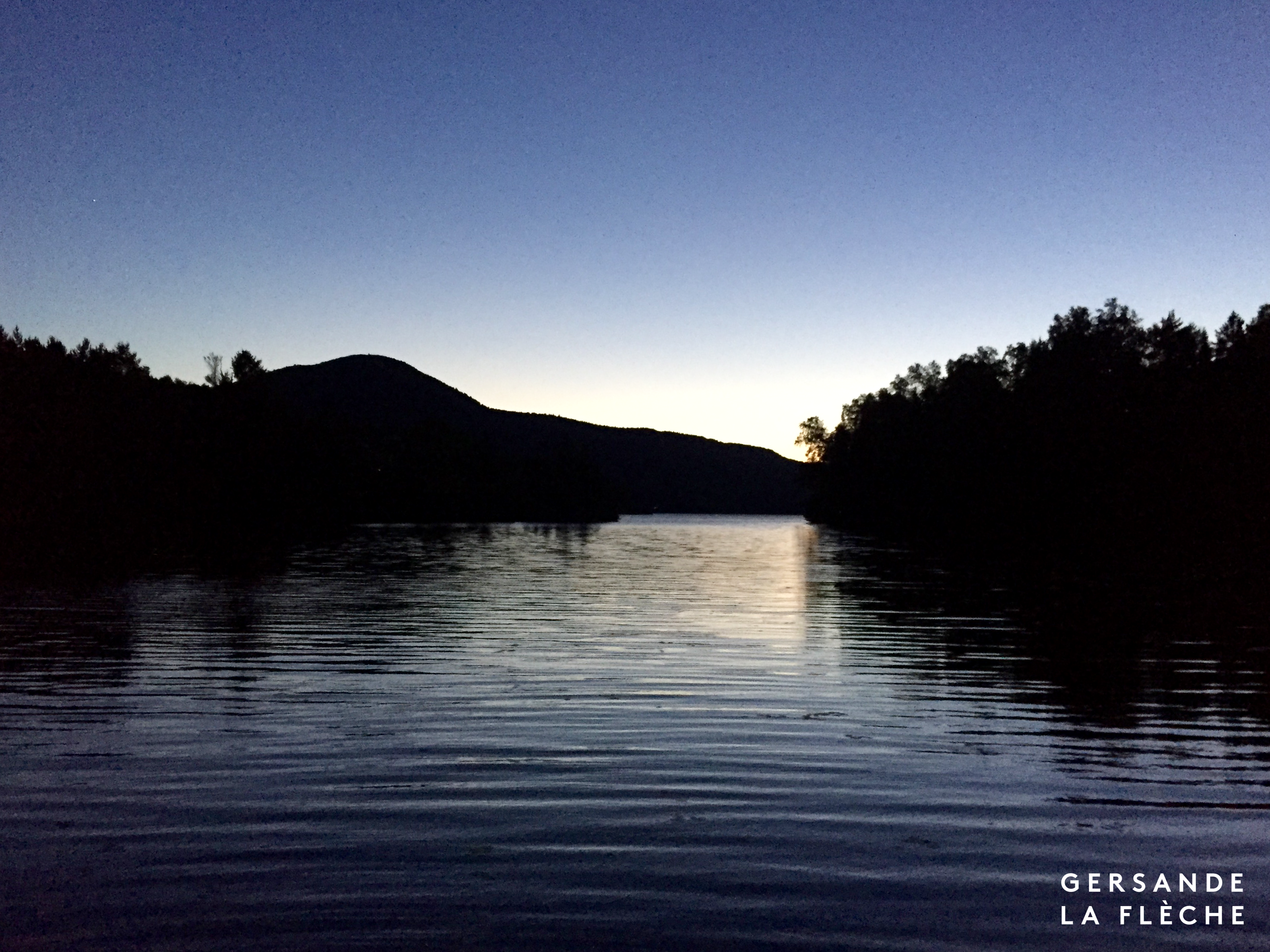 But the bottom line was clear enough: global capitalism has made the depletion of resources so rapid, convenient and barrier-free that “earth-human systems” are becoming dangerously unstable in response. When pressed by a journalist for a clear answer on the “are we fucked” question, Werner set the jargon aside and replied, “More or less.” —Science Says Revolt by Naomi Klein in the New Stateman

Here are some facts about water. Human beings, on a biochemical level, are somewhere between 50-60% composed of water. This percentage is not that far removed from the composition of our biosphere. A good 71% of the earth is covered in oceans, and 97% of all the earth's water can be found in our oceans.

Of the less than 3% of all water on the planet that is fresh water, something like 1% of it is accessible. Of that tiny sliver of fresh water, Canada has a fifth of all the fresh water in the world in its lakes and rivers, and hidden away below the earth. Much of that fresh water, however, is not renewable.

Climate change, on an individual level for someone like me (a North American settler who is extraordinarily privileged in many ways) is something of a waiting game. A test of patience: wondering when (probably not if) the water coming through the plumbing in the apartment will stop being safe; when (probably not if) Canadian winters and summers are going to overload infrastructural support systems because of forest fires, droughts, flooding, and extreme cold; when (definitely not if) the rest of the world, overpopulated and thirsty, is going to wake up to the fact that Canada's population density was last measured in 2014 at 4 people per square kilometre according to the World Bank. (Just to compare, India's is 441 people per square kilometre.)

Though I cannot say that what I am about to write are facts, here is what I think: the economic and political interests that drive Canada and the United States do not care about climate change, the catastrophic 2 degrees Celsius rise in global temperature, or the apocalyptic mass-extinctions and ocean level rise (which are happening faster than expected). These forces continue unhindered not because of indifference, on the contrary: it is in their express interests not to care.

I am not alone in thinking so. It's been said (sometimes shouted) by Indigenous people and people of colour and environmental guardians all over Canada and the United States and beyond, for decades, if not longer.

Right this moment, members of over 90 Indigenous nations are assembling in North Dakota to protest Dakota Access Pipeline. Read the BBC report, or the Democracy Now! report, or the Wall Street Journal article, or even the New Yorker essay, or find the myriad of Facebook, Twitter and Instagram posts chronicling the protests and direct action of #NoDAPL and #StandWithStandingRock.

Indigenous people have been fighting for and protecting water—through direct action such as protests, marches, and blockades—because their lives and their futures are on the line.

Native people have always been the collateral damage of a growing nation; our deaths are an acceptable risk in the face of capital gain. (...) Since the time of Columbus we have learned that violence against the land is violence against Indigenous women. This is why you will always see Native women leading environmental movements. Our lives depend on it. — 3 Things You Need to Know About Indigenous Efforts Against the Dakota Access Pipeline by Taté Walker in everydayfeminism.com

What do you do in the face of a generation—the generation of my parents—completely unmoved by climate change? Corporations are people who seemingly do not feel the urgency of 2 degrees Celsius. How do you convince people my parents' age, who still hold positions of influence in society, who still number the majority of Canada's "captains of industry", that the economic structures that dictate our society are rotten to the core?

I'm tired of waiting for ocean levels to rise. I have no faith in conventional modes of thought and incremental change. I am made to feel like I completely lack the economic and legal expertise to convincingly argue my perspective with the North American who still believes in things like "capitalism with stronger parameters". I am also tired of being told that I am arguing my feelings instead of facts.

So here are some more facts. Tides are rising. Species are going extinct in mass extinctions we can't predict the consequences of. The oceans are polluted. Our land is polluted. We don't need to invest in more fracking. Fracking causes earthquakes. We've had decades to prepare and reverse the effects of climate change and instead we made our problems worse, content to let the poorest and most dispossessed humans suffer even further to fuel our lives. Environmental racism disproportionately affects Indigenous, Black and other racialized communities in Canada and the United States. Canada has a history of mismanagement and negligence with regards to water and First Nations, to put it mildly.

Wanting more money is not a good enough excuse to ignore, perpetuate and exacerbate poverty, colonialism, and environmental destruction. We can't drink oil, even in a petroculture like ours. Water is precious.

When you take a drink of water & find it contaminated with oil & uranium, remember that we fought for you & you were silent. #NoDAPL

I'm waiting for that watershed moment when all hell breaks loose and we are truly fucked. The waters have already started rising.

As the cold water reaches my ankles, I think of being ten years old going to Tadoussac in the fall, and the kind of ignorance it takes for a sheltered ten year old to drink unfiltered Saint Laurent river water on a whim. 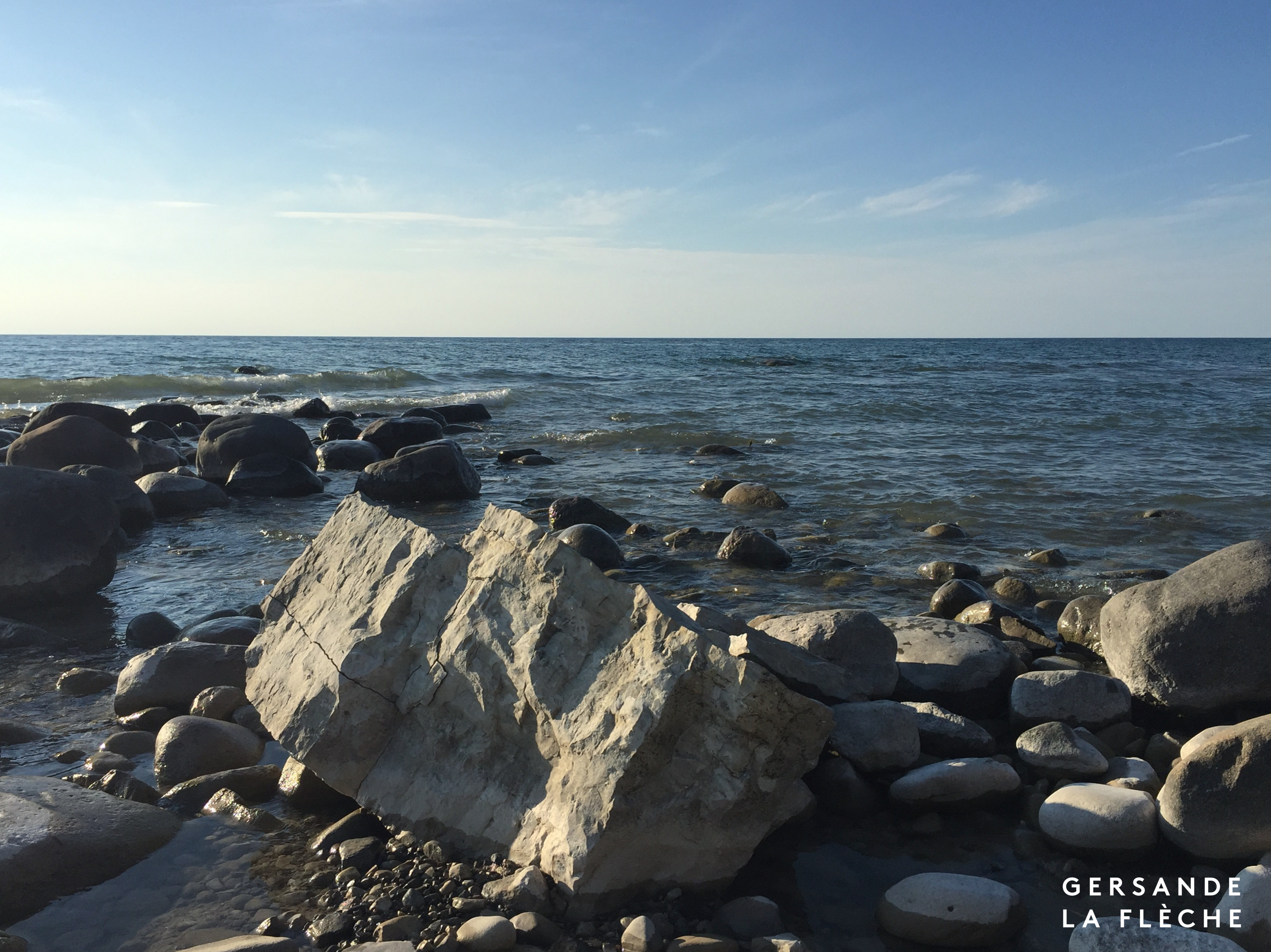 Taté Walker in the piece for everydayfeminism.com outlines several strategies for accomplices of NoDAPL who want to help the Indigenous people protect the land and water for Dakota Access, even from afar. Please check out the link for more information. 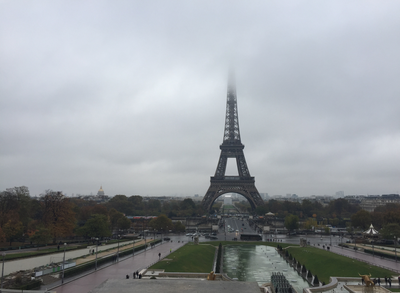 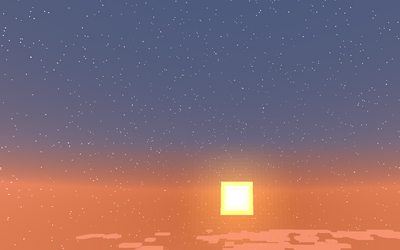