This past weekend I was a participant in GAMERella, a game jam aimed at women and beginners, whose mission is to foster a safer space where game jamming can happen in a fun, collaborative, and healthy, way.

During the jam I was interviewed in French by some really cool student journalists from UQAM. They wanted to know more about game design, #GamerGate, and why diversity in games is important. I felt really lucky they wanted to speak with me. I was really nervous that the recording was in French - I always forget really basic vocabulary and grammar whenever people are watching. I'm fluent in French (given it's one of my langues maternelles) but I get really self conscious about my accent and intelligibility in public, especially in Québec!

The theme of the jam was #BOSSup, inspired by the following Nicki Minaj video: #GAMERellaFirsts Working in Unity for the very first time! http://t.co/B3OgG4cQnL

#GAMERellaFirsts Game jamming in 48hrs is an exercise in constantly minimizing scope to create something amazing.

I was fairly set at working with two other people because I think working in threes is often ideal for short jams. One of my teammates, Leifur, actually wrote a blog post about the experience of jamming. It was his very first jam! 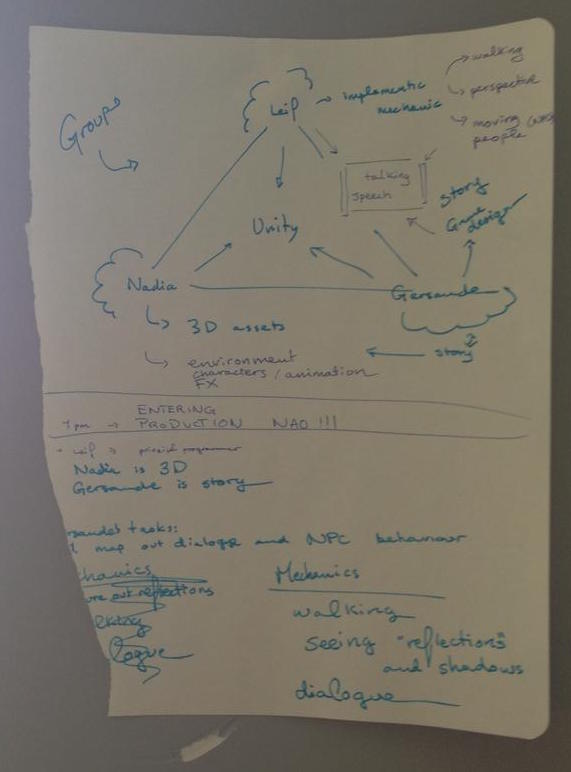 My initial notes when we decided how to delegate tasks. 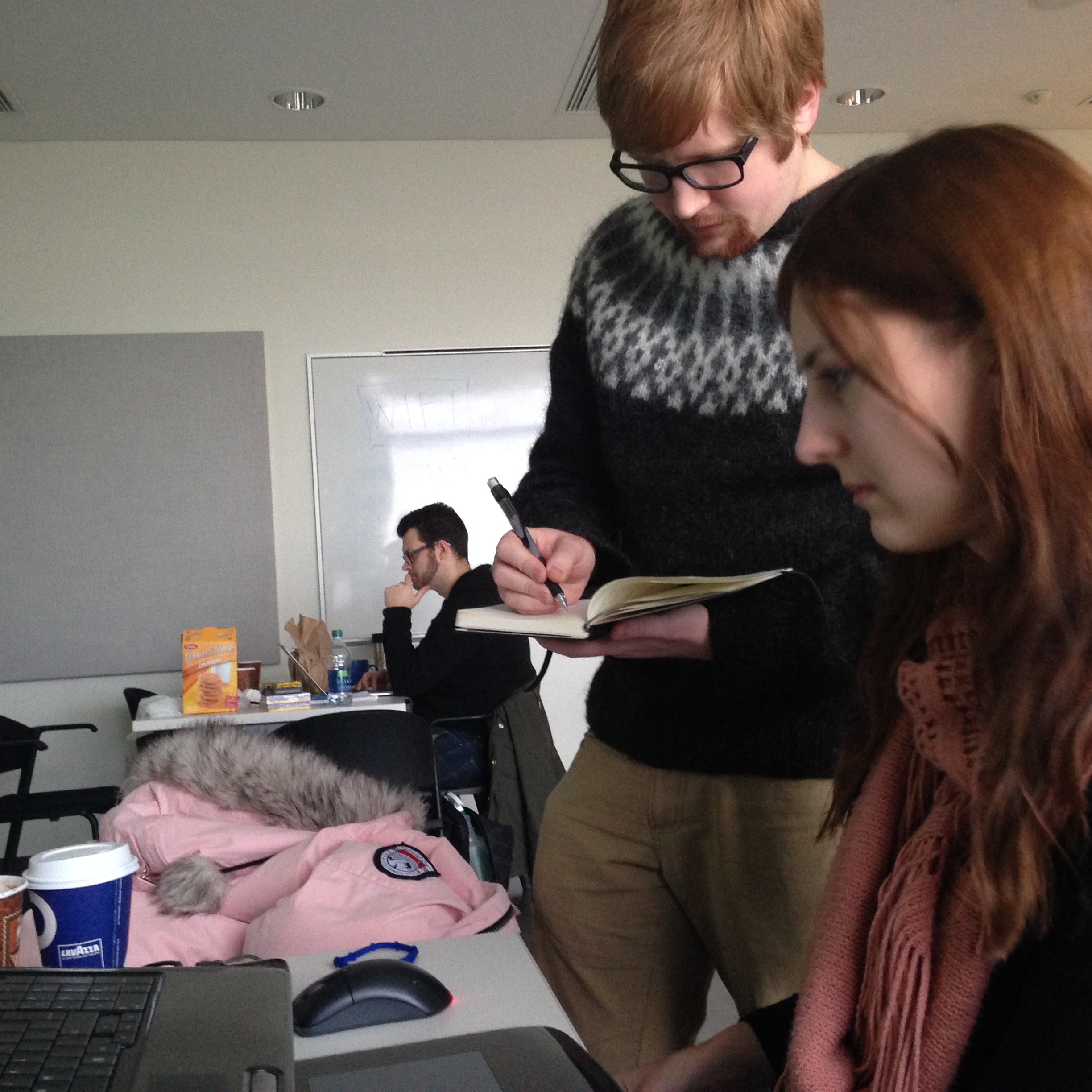 (I took a quick picture when they weren't looking!) 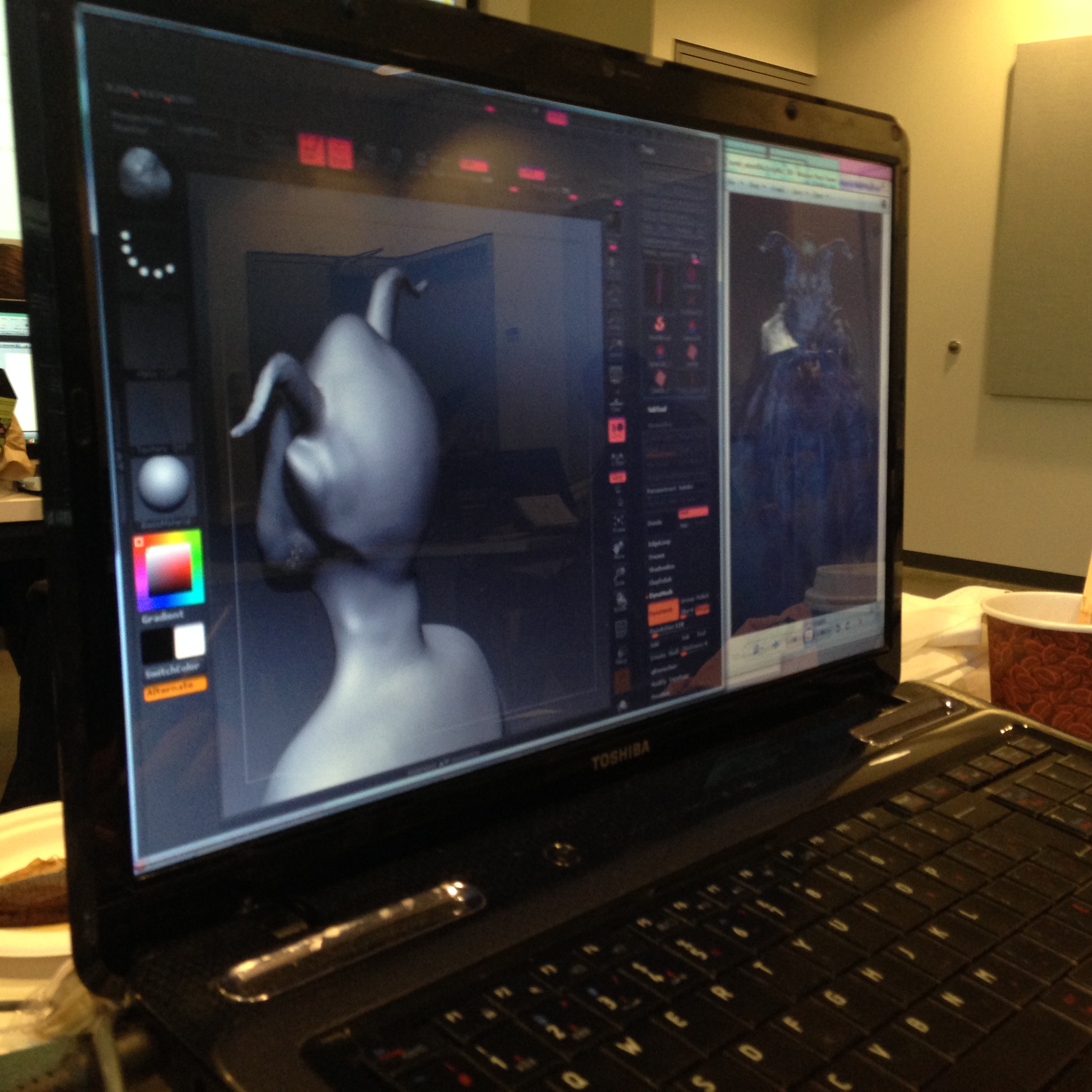 The first draft of our BOSS character.

Because we had Nadia Miltcheva in our team, who has amazing 3D art skillz, we knew that working in Unity3D in 3D space would be rewarding. We didn't have any concrete thought-out ideas coming together, though we knew we wanted to create a game from the perspective of a videogame boss. 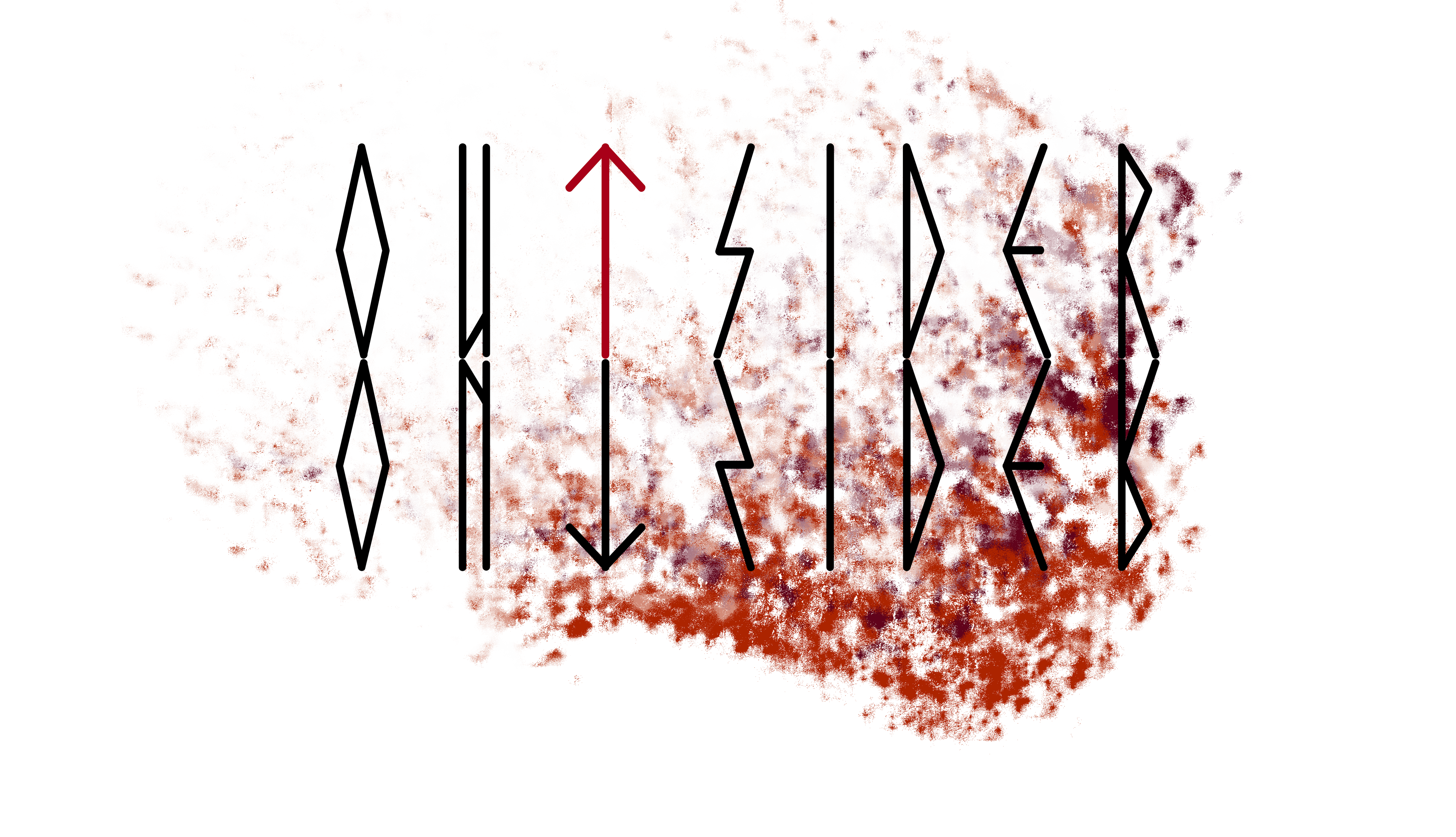 We came up with three goals:

And guess what? Despite trying our damnedest, we only actually accomplished goal number 1, which was "walking around a space", though we actually created some beautiful assets, dialogue, and spent a good bit of time researching how to make dialogue in Unity, as well as reflections and shadows. Our ambition was rather well rewarded because even though we essentially created a walking simulator, the ambiance in the space we created was actually almost exactly what we were reaching for: something uncanny, alien, disembodied.

I'm actually extremely proud of the prototype we finished by Sunday at 5pm. I can't even describe how necessary this past weekend was for my own psyche. I pushed every single obligation and duty aside, and threw myself into creating something totally unrelated to any of my existing projects. More than anything, the experience was really healing.

In order to figure out what Outsider was about, I started putting together notes in the form of a Twine project in order to prototype the prototype the three of us were building. We had a shared folder where we were dumping in assets and sharing ideas. Sharing projected dialogue and gameplay ideas into a twine html file was a quick and easy way to share what was in my head with my teammates. We ended up moving away from the cartoonish tone of the twine prototype, but the twine is a fairly good blueprint of what our first idea was. 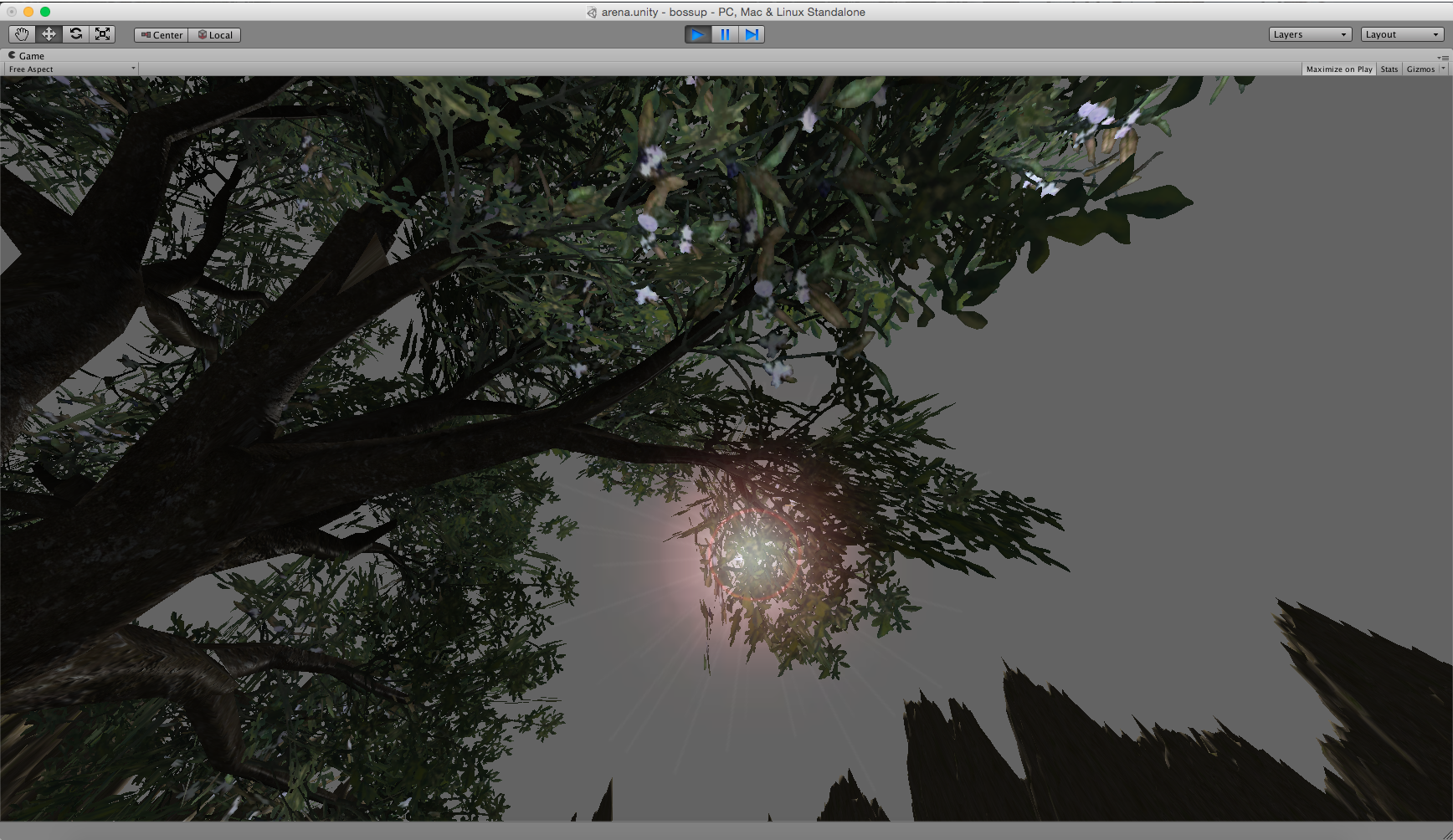 Screenshot of the sun and our tree models!

You can play the version of Outsider which was finished for the jam here on itch.io. Nadia, Leif and I have quite a few ideas on refining it, and we shall keep working on Outsider, turning this game into the Lovecraftian mind-twisting experience we started to design over the weekend!

Also, a quick plug for my Patreon if you want to support my game building work: I will be offering more detailed information on the creation of Outsider as well as a lot of downloadable goodies such as more updated dialogues, twines, the soundtrack, concept art, as well as downloadable Unity files if you want to take a look at anything more closely! Check out my Patreon here.

A big thank you to the following people in Montréal for everything they've done:

Also these amazing amazing people who support my Patreon and make it possible for me to devote myself to endeavours like GAMERella and the finishing of Outsider!

Please go check out the other GAMERella games here. They are SO inspiring!!!

This picture of me from the jam is hilarious!!! 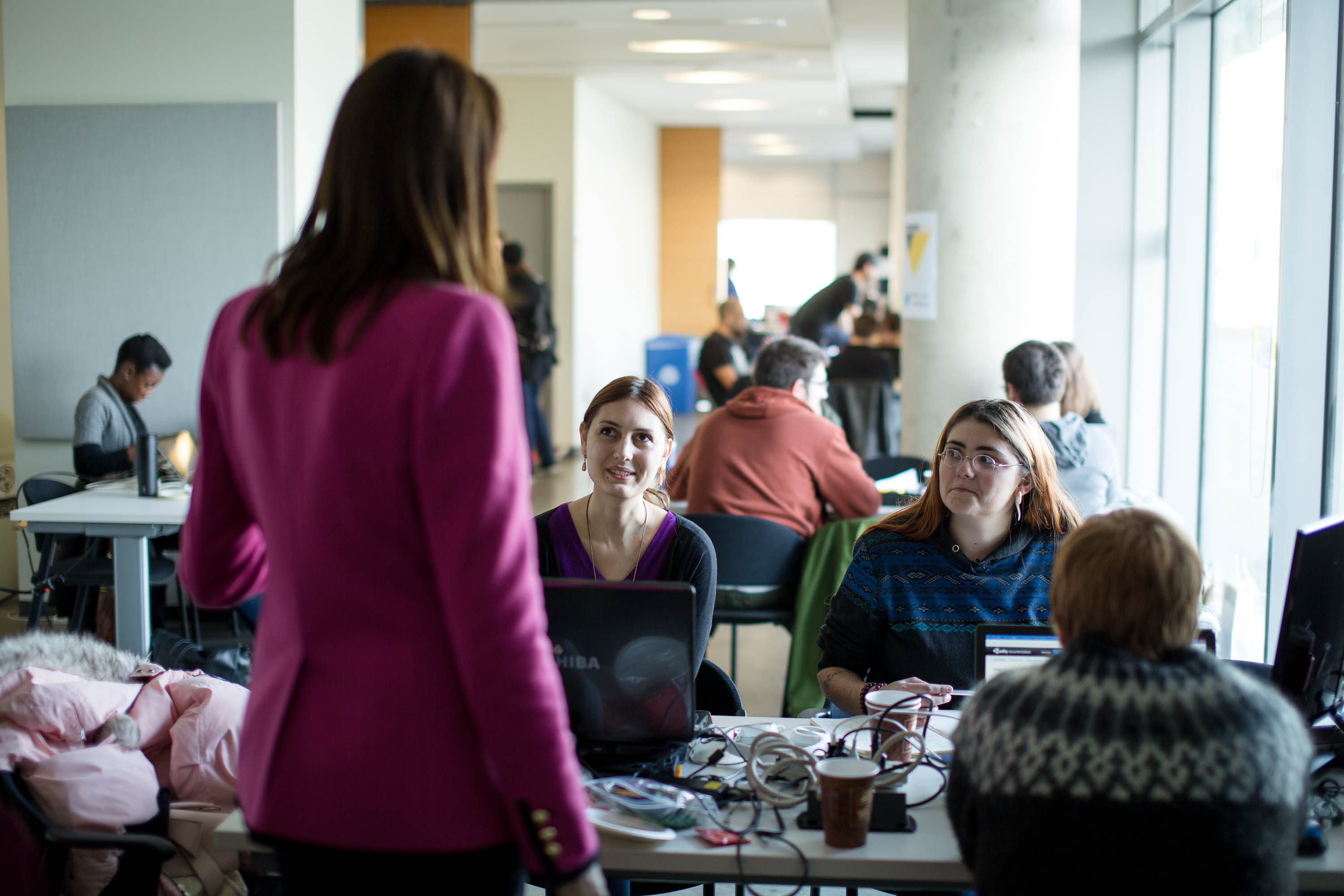 Thank you very much Mattias for this gorgeous pic.