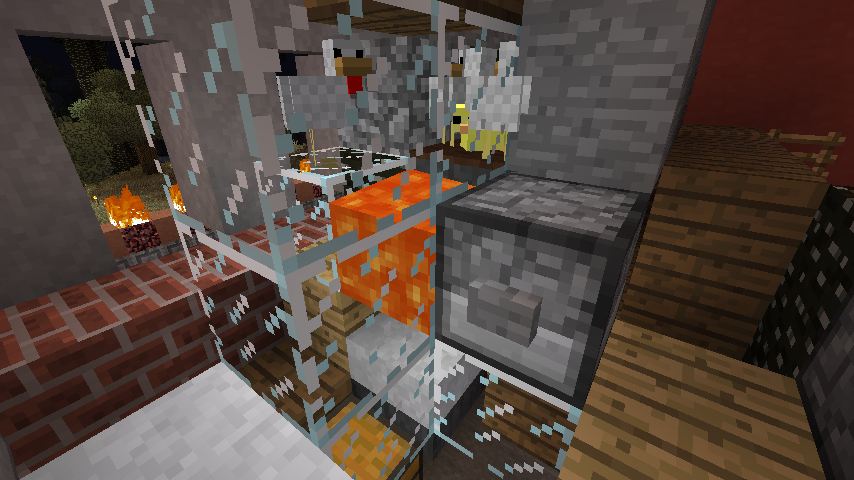 Originally posted on the website of the Ampersand lab (&) at Concordia University at http://www.amplab.ca/2014/09/14/la-maison-des-poules/

When I built my hen house, I had two objectives in mind.

In Minecraft, feeding wheat seeds to two chickens standing near each other will cause them to procreate. This, at first glance, emulates a 'real world' system that says that matter or energy can not be destroyed or created from scratch, but must be transformed or displaced in some way.

The first law of thermodynamics in a closed system. In a manner similar in which "physics" manifests itself in Minecraft, scientists have to make wide generalizations about how particles work in order to make the math and science look pretty.

Except for the fact that chickens seem to lay eggs when left alone, and 1 out of 6 of those eggs will yield a chick when thrown. Minecraft does not represent a world  in which matter or energy is always perfectly conserved. This is one way in which players can "game" the system.

The other manner in which agriculture and farming ignores the first law of thermodynamics is in the growing of seeds to wheat. It only consumes time (a resource particularly important for the Minecraft player) but does not consume water or earth, which are resources of matter. As for energy, plants do not grow in total darkness in Minecraft, but I would not say that the plants consume light via photosynthesis. In fact, while darkness is a factor that prohibits the growth of plants (other than mushrooms, which dislike light), light is rather neutral - whether torchlight, lamplight, or sunlight, a plant will grow as long as darkness is kept away.

For another post, I will probably want to write a little more on light and darkness management in Minecraft - both are essential for creating ultimate crafting systems and reach mastery over many different mods, as well as the vanilla aspects of the game.

Let's return to the hen house I built just next door to #BigFriedChickenCompany. The building is modern but spacious - with large windows that allow the light to pour through (and for chickens to glitch their way to freedom). When thinking of my two overarching principles building the hen house, I believe I have succeeded with regards to its aesthetic pleasantness. The chickens roam in a big pit, but there is adequate light and air, and they tread on grass instead of machinery.

However I'm unsatisfied with the hen house's approach to wheat farming. I have an upstairs portion to the hen house, where dirt and water and lamps are laid out to facilitate farming. A few times, I used bonemeal (a Minecraft crafting tool obtained either by pressing apples in a fruit press or killing lots of armed skeletons) to speed up the process of growing the seeds from saplings to useable grains. I even started collecting enough wheat that I've started laying the plans for a bakery nearby. But it seems like my small, manual farming yields much more wheat than seeds, which are needed for chicken reproduction. While I have over 20 stacks of wheat, my seed supplies constantly dwindle from the 50s to 1.

My attempts at humane chicken farming, in any case, don't mean much at the moment. The chicken of #BigFriedChickenCompany are housed in a 1x3 cell in a lava pit on the side, standing over hoppers ready to collect fallen eggs, feathers and meat for sorting and production. My hen house is a lone bastion of good-looking, inefficient, useless agriculture.

In naming the hen house "the hen house", I started wondering about the various pejorative sayings that are attached to hens. Europe was an agricultural culture for much of the history in which the English and French we speak now was formed, so it makes sense some of the older sayings originate on the farm.

Here are some of the stranger hen-related sayings I've heard:

*Originally posted on the website of the Ampersand lab (&) at Concordia University at http://www.amplab.ca/2014/09/14/la-maison-des-poules/*
The link has been copied! 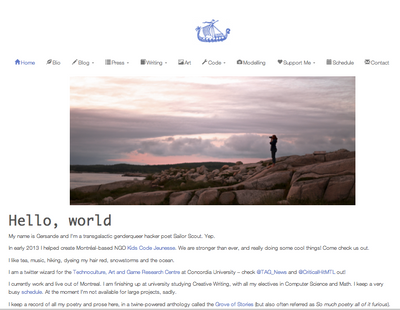