This book rocked my socks off.

I finished the book around 4AM and found myself scrambling to open up a blank page and scribble down my tenderest first thoughts and impressions.

I can't believe I picked up this novel from the Argo purely based on how much I liked the cover, without even looking at the back; to the folks on Instagram who discerned it near the top of my "to-read" pile and who encouraged me to read it quickly, thank you for encouraging me as I could not put it down.

This blog post contains spoilers for the end and you probably should go read the book first and come back here afterwards! As with most of my reading logs and notes, this blog post is not a review but rather consist of me doing that classic bit of "overthinking everything." As a result these reading notes are a bit rambly but I hope you'll enjoy them.

Space... the final frontier... I wrote in an earlier blog post this year that I've been hobbling together a TTRPG in the Star Wars universe set in the era of the Old Republic, and that one of the decisions I made as GM was to give everyone in my party a ship to care for, a home to protect and keep running smoothly in the black of space. It's a very standard setting in science fiction that I think, when done well, really works. Living with your found family in a dangerous or treacherous setting, working towards a common goal, daring to heal a little along the way — these are familiar and beloved tropes. Many of us aspire this in real life.

The Long Way to a Small Angry Planet (TLWTASAP for short) takes this structure and uses it to incredible effect. The journey, taking place over the course of a standard galactic year, chronicles the long haul that a ship takes to get to where they need to go to fulfill a governmental work contract that could change everything for the ship and crew. And while there are raids, scavengers, distress signals, and mechanical failures along the way, all of these work really thoughtfully, almost seamlessly, with every characters' emotional arc — to the point that by the time that when the Wayfarer reaches that small angry planet at the end, it doesn't even matter that we're a small handful of chapters to the end of the book. It's the journey, not the destination — even when one is on a ship like the Wayfarer, whose job is to punch stable wormholes through the fabric of space-time.

Yet while the length and eventfulness of the journey could make the "small angry planet" at the end feel almost like an afterthought, it doesn't. I was worried it might. I admit that when I was reading it, the death of Lacey didn't feel real to me — not until the much quieter scenes that followed with Ohan and Corbin, Lovelace and Pepper, Ashby and Rosemary. When Rosemary lost her temper at Ashby, arguing that he needed to get over himself and stick up for his crew no matter how useless it may seem (that scene keenly reminded me of this quote from Angel which has been on my mind lately: "If nothing we do in this world matters, then the only thing that matters is what we do."), I truly started to feel the full impact of the climax.

The action climax in orbit of Hedra Ka was tense and gripping — but what really moved me were the much quieter scenes of the aftermath. It reminded me of the end of the Lord of the Rings, when the Hobbits return to the Shire and realise that they will never be able to return to the Hobbits they once were. It goes beyond subtext into text in the novel, as through the death of Lovey, the ship's Artificial Intelligence, the ship (symbol of the journey, of found family, of healing) loses her "soul" or "spirit" — or maybe more simply the history and experiences and lessons that made her who she was. With her death (and rebirth, as Lovey had to be reset to her "factory" settings in order to save her from constant torment and what approximates to incredible psychological pain) the ship loses something irreplaceable. It's why the scenes that follow — that last chapter especially — are so important, because they show us that even after irreparable damage, the crew and family of the Wayfarer can still do right by each other (such as the scenes between Jenks, Kizzy, Sissix and Rosemary), and even demand better from each other (such as the scene between Rosemary and Ashby).

Though that does bring me to an interesting conundrum in assessing that incredible scene between Corbin and Ohan — arguably the emotional climax of the books. In a book that so carefully demonstrated how important consent, agency, and autonomy are  — it certainly doesn't shy away from complicating it in these transgressive scene. Ohan as a character is a fascinating remix of the Star Trek Trill symbionts — a person who accepts within their body another living organism who then makes tangible and irreversible changes to the host's body and brain. In what I find to be a completely fascinating bit of worldbuilding, in this universe the act of physically going through a wormhole will break a sentient's brain, temporarily at least, which is why each ship that "punches" through space-time needs a Sianat Pair like Ohan, who can function in the "space" outside space and can measure trajectories and navigate the ship safely in and out of time-space without the help of a computer. Ohan's refusal to cure the virus that is killing him is so compelling, especially after you discover that he would retain his ability to navigate outside of space-time once the virus is cured. In Star Trek, only the very best of the Trill are even considered for joining with symbionts, and the act of joining itself occurs in adulthood between two consenting adults. Whereas in this novel the Sianat infect their very young children with this virus called "The Whisperer," as they believe the virus to be a sacred gift, despite the fact that it destroys the host bodies long before their usual life expectancy (it's hinted that solitary Sianat live several hundred years, whereas Ohan has barely hit 30 and has less than a year to live).

As I think about it more, I wonder a lot about the children who are infected with the Whisperer and whether Sianat children can consent to such a thing. However, as Ohan as a Pair truly wanted to be allowed to die as a Pair with the virus and refused the cure, was Corbin — taking advantage of their weakened state to inject them with the cute against their will — trying to do something right (and maybe right a past wrong) yet while doing the wrong thing? Selfishly I feel that if there is one scene I think is lacking from the book, it is the scene where Ohan and Corbin work this out, once Ohan is a solitary again. Even if I was extremely glad that only one member of the crew died by the end of the book, I'm still left wondering about the framework of consent in these scenes, and how the consent of framework might not always be sufficient as a way to suss out what "the right thing to do." I think it gets especially grave with things like doctor-assisted suicide or self-destruction, like in the case of Ohan, where the people around Ohan now had to voluntarily chose not to intervene to save them. I don't want to read to much into the allegory here, because this is sci-fi and suicidal ideation isn't really the same as being infected with a virus that changes your personality. But it was making me think rather a lot about that old rationalization against mental health intervention in the form of therapy and drugs that goes something like: "We wouldn't have Starry Night by Van Gogh if he'd had adequate mental health care." I hate the rationalization that genius and suffering are inherent to each other. I'm personally tired of the Puritan ethos that suffering is godly or sacred or morally superior (until, of course, you become a burden on your community, then you better take yourself out of it!)

Back to the book and on the subject of themes, The Long Way to a Small Angry Planet also has some interesting things to say about power and authority. It's through the characters of Dr. Chief and Ashby that the book interrogates power and your responsibility to power the most. Ashby in particular comes from a culture of Spacers that are rather strict pacifists, and abhors violence and exherting his authority over others as he believes that humanity has forfeited the right to be in charge given what has happened to their planet. Other than wrangling Kizzy or Corbin's less-than-ideal behaviours, Ashby is a rather relaxed captain, and in one interesting scene, he is actually unable to properly take charge of a dangerous situation — the first time his ship is boarded by desperate pirates. In this scene, more out of sheer luck than anything, Rosemary is able to take charge and save the day. In a second scene, later in the book, Rosemary ends up losing her temper with Ashby's defeated attitude and explicitly tells him that his authority is actually part of a relationship of responsibility towards his ship and crew. Rosemary's outburst calls back to an interesting scene earlier in the novel, when Kizzy tried to convince a shy Rosemary to let her expense luxury soaps to the galactic government agency that hired them. Sissix reprimanded Kizzy for putting them all at risk of losing their jobs (they would have surely lost the contract before they got paid had the unapproved expense been audited). In so doing, Sissix reminded both of them that when Kizzy gives an order about a technical problem that could endanger a shipmate's life, Kizzy expects to have her expertise respected, and it follows that when Rosemary is also trying to protect the ship's livelihood, Kizzy must respect that. Back in the scene between Ashby and Rosemary, when Rosemary reprimanded Ashby for not sticking up for the crew and compelled him to do better, it was a reminder that authority must be born out a relationship of responsibility — and that it's earned. It's a really interesting take to have, as Ashby's pacifism is continuously poked and prodded throughout the novel. Ashby is able to rise to the occasion and advocate for his crew and his dead AI — who the galactic government does not recognize as a real person — in a manner that doesn't violate his own pacifism. But it did, I think, require him reconciling within himself his own relationship with power and authority.

Anyways, there's a lot else I could write about this book that caught my eye — namely the wonderful variety of pronouns, polyamory, friendships, identity, the discussion on conformism and orthodoxy, the dichtonomy between tech and nature, POLYAMOROUS LESBIAN ALIENS, but I think I'm going to stop writing for now because I promised myself I'd keep this short and I need to get back to work. But all in all, I found The Long Way to a Small Angry Planet to be a provoking and an excellent read. Oh, and there are sequels!

This week, we look at Ryan McMahon's rending podcast about the unsolved murder of Indigenous teenagers in Thunder Bay, a "debate" on the existence of "state racism" in France, and end with the extraordinary poem "The Palace" by Kaveh Akbar. 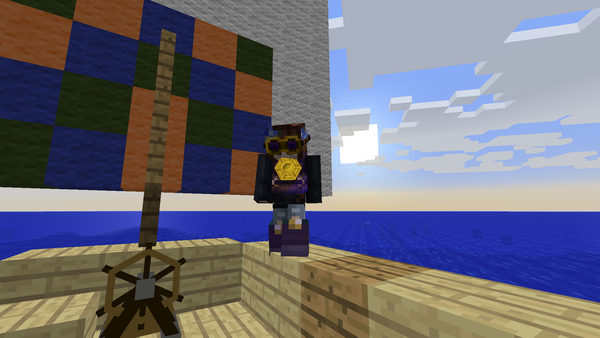 Joachim and I played Minecraft together and had some meandering conversations about Minecraft, the modding culture, the history of the server, and the inherent colonial nature of these games.