And another first of May

A few notes on the end of April in these times of pandemic.

I can’t stop dreaming of all my teapots shattering irreparably. It’s the kind of stress dream that really underlines how important tea has become to my day-to-day stability. In the morning, before doing anything else, I go about preparing a pot of tea (quickly decimating my reserves of gyokuro, sencha, pu-erh, and oolong). If I’m in a good mood, I put on some music or the radio in my headphones, open up my journal, and begin my day with a cup of tea in one hand and a pen in the other. If I’m in a bad mood, I do the same thing. In the afternoons and evenings, I often switch from tea to tisanes. My favourite tisanes are spicy, with cardamon or shiso flowers, which help a lot with my seasonal allergy symptoms.

I am trying to not waste all my time in front of the computer but it’s hard. At least one good positive change is that I’ve effectively curbed the amount of news I’m watching. I follow enough local Montréal journalists that I’m not really at any risk of missing out on anything really important, and I’m trying to limit my time spent on social media in general. One other surprising change: I’m listening to podcasts a lot more now, when sitting alone with my thoughts becomes a bit too much. One that struck a chord this week was from the Québec investigative research team Synthèses on the murder of Louise Chaput at Mont Washington. It’s a Québec-spin on true crime that doesn’t feel needlessly sensationalist, which is cool. Another podcast I’m giving a relisten to right now is an informative series on tea by New Yorker Ken Cohen called Talking Tea Podcasts. I strongly recommend it if, like me, you are obsessed with tea.

(Also, if you have any podcast recommendations right now, I’m all ears! After years of having a really hard time giving all my attention to podcast, seems like I’ve finally gotten the hang of it.)

During the day, Leif and I share our small space as best we can without getting in each other’s hair. The hardest part is definitely negotiating the space when we’ve got a lot of phone or video calls happening at the same time. Our appartement is small and has no doors between the rooms (except for the bathroom) to give each other privacy. And while there definitely have been moments where I’d give a lot for more quiet and fewer distractions during the day, I’m really honestly quite happy to accept this situation compared to the alternative timeline where I’d be about to start my eighth week in isolation in complete solitude.

At night, generally pretty late, Leif and I go outside to walk through parks, alleyways and other empty spaces near us. We prefer stormy nights with a lot of wind and a hint of rain, because it means we’ll have these wide open spaces to ourselves. When we go towards Laurier park, those huge silver maples are pretty awesome to behold when the wind is really gusting, throwing branches around as if they were strands of wheat, and the noise of those huge tree trunks and branches bending reminds me of crashing waves. And there are so few cars on the road and so little noise pollution in general that now, when we go outside, even if we’re over a kilometre away from the train tracks, we can hear the trains passing at all hours.

Last weekend, I saw my mother from a distance for the first time in seven weeks when she came to our building to pick up a thermometer we needed to ship to a sick family member in New York City, where it’s been impossible to find or get shipped thermometers and a lot of really important basic equipment and household items.

In a fit of angst and frustration, I also told Leif last weekend that I needed to get away from the house and our usual haunts. Most of all: I needed to get out in daylight and smell the unfrozen earth. Leif agreed. We were able to find a few secluded paths alongside some highways within the city were we got to walk for hours in the sun more or less in solitude. I saw a lot of birds, and even a green garter snake, and despite the noises from the highway, it was completely salutary to be able to move in the sun.

I have been thinking a bit and with some sadness about all those lofty objectives I set out for myself at this time last year. I had started to work seriously on the beginnings of a manuscript I’ve more or less abandoned since. And I know logically that we’re going through a period of intense collective trauma but it’s still somehow disappointing that I can’t summon enough willpower and discipline to get to work on a project I was lacking time for just a few months ago.

So I’ve been trying to celebrate the little victories as they come, like my small accomplishment when I managed to finish my first ever sewing project. That gave me a small but very real boost of energy. It’s a reminder that if I’m having a hard time gathering enough willpower to get to writing, I can always turn to other things while I’m waiting for my “esprit d’atelier” (discipline, balance, bravery) to return.

On the reading side of things I have been doing better because I’ve been quite determined to stay away from screens as much as I can afford to be. I finally finished Le drame de l’enfant doué by Alice Miller, which was recommended to me a few months ago by Meghan Bell. The book is on psychoanalysis and was published in the 1970s. Apart from a handful of bits, it’s a pretty compelling read that remains in my opinion relevant today , as it covers the dynamics of the emotional abuse of children and the manner in which the cycle of abuse recreates itself across generations. The latter is of particular interest to me personally.

I am also currently reading two science fiction short stories that were suggested to me by my friend O. The first is The Desert Glassmaker and the Jeweler of Berevyar by R.B. Lemberg which can be read online at Uncanny Magazine. The second is from writer Amal El-Mohtar, The Truth About Owls, which can be read over on Strange Horizons. I found The Truth About Owls extremely poignant and moving, and within a few paragraphs the story had immersed be in all sorts of feelings from my own childhood. It’s not the first time I’ve found Amal El-Mohtar’s writing particularly successful: back in February I had the pleasure of reading the epistolary science fiction novel This Is How You Lose The Time War which she co-wrote with Max Gladstone and I absolutely loved it. Thank you again to O for these great suggestions!

And here we are finally arrived in May. This morning was rainy and grey, and a little sad, but I’ve been watching the tiny green buds growing on the lilac tree downstairs for the past few days, and I know it’s only going to take another few weeks before everything comes alive again. And I’m not sad to see April go. That month was passing by both way too slowly and way too quickly. Soon I’ll be able to spend time on my balcony comfortably, and get some fresh air and sun that way.

Thanks for hanging out with me for a while. Health and solidarity to you on this May Day 2020, friend. 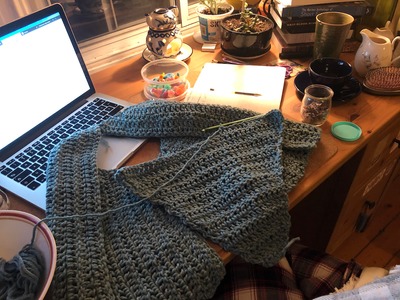 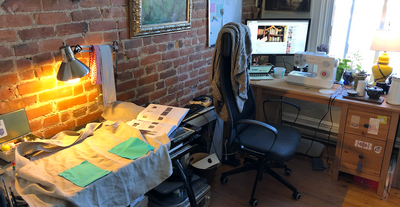 So I tried Cook It and I have Opinions