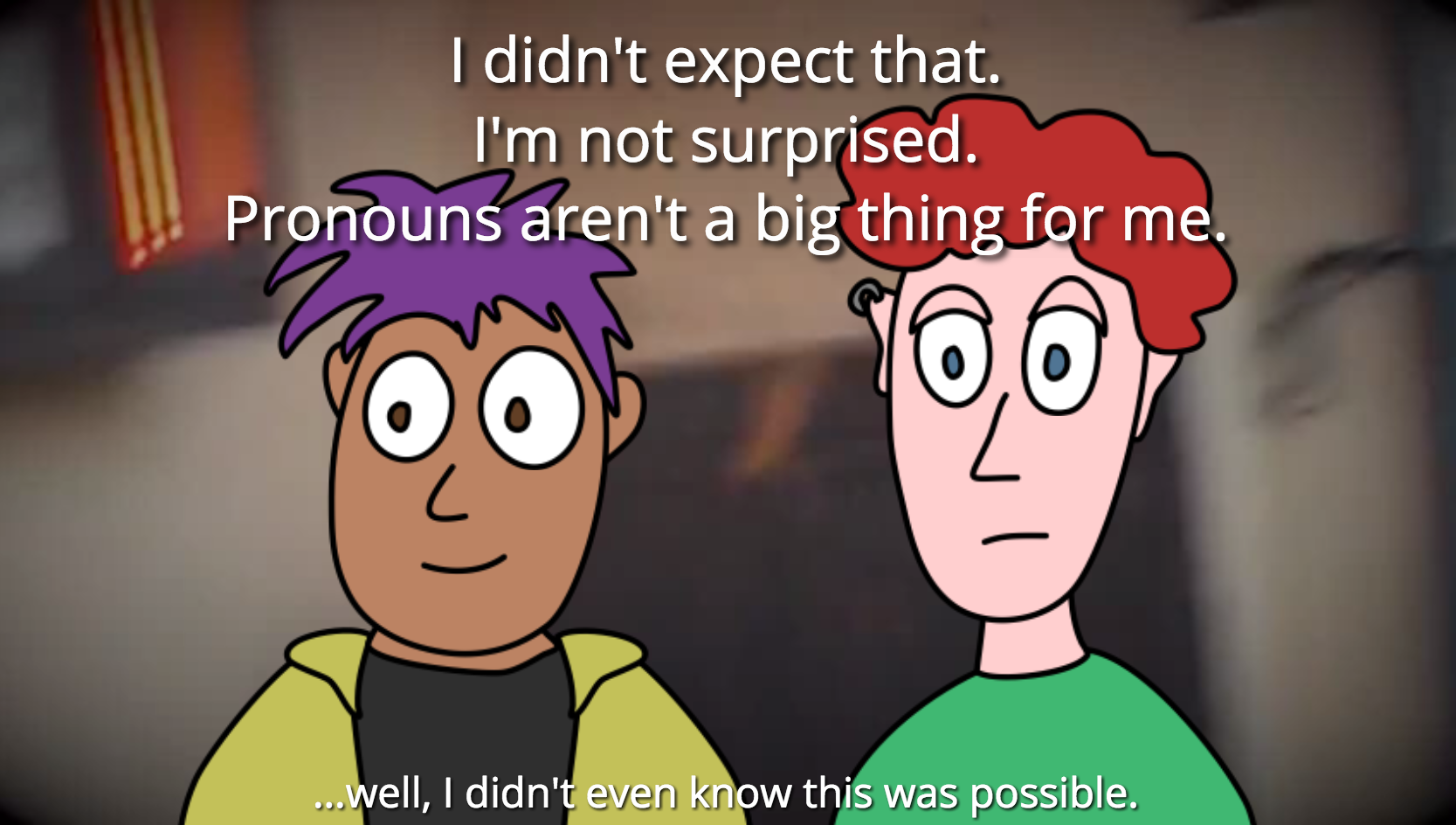 Pronouns, sexual attraction, bodies, parental acceptance, privilege and passing, these are some of the topics in the conversation between Quark and Lex in the videogame Conversations We Have In My Head by Squinky. Quark and Lex are former lovers, who broke up over ten years ago, but Lex is also a figment of Quark's imagination.

The first time I played Conversations I forgot about even checking if the game accepted user input. I had recently played Squinky's game Interruption Junction at Princess of Arcade, and that game's primary player mechanic is to allow the player to abruptly interrupt the ongoing dialogue. But unlike Interruption Junction, where the text of the game is too convoluted to really keep track of (think Simspeak), Conversations pulls the focus from the interruption mechanic to the content of the text itself.

It's speaks to the quality of the writing and the concept that the game is greatly worth listening to at least once without trying to affect the outcome of the conversation. What really made the monologues and the back-and-forth compelling during my play-through was the intimacy of the conversation. The emotional closure available (and simultaneously unavailable) throughout the introspection of Conversations is paradoxical but also immensely desirable. That closure, which Quark finds in their conversation with Lex, can either feel like it is giving Quark a deeper understanding, and closeness, to Lex and Quark's past (and present) selves, or it can feel distancing, the distance that becomes undeniable after ten years of silence post-breakup.

Squinky's Interruption Junction and Conversations We Have In My Head rely on the player deciding to interrupt or not interrupt. Both games contain a character who gradually fades away, and both those characters are the self (or aspects of the self). Junction is a game about alienation while trying to participate in a social situation that may not have space for you, or what you have to say. Conversations takes that loneliness even further, exploring our need for closeness and closure within ourselves. With the same mechanic, Squinky is able to explore different emotional landscapes, as well as intimacy, loneliness and social interactions from two very different perspectives.

To find out more about Squinky and their games:

This short review was originally posted to The Treehouse.