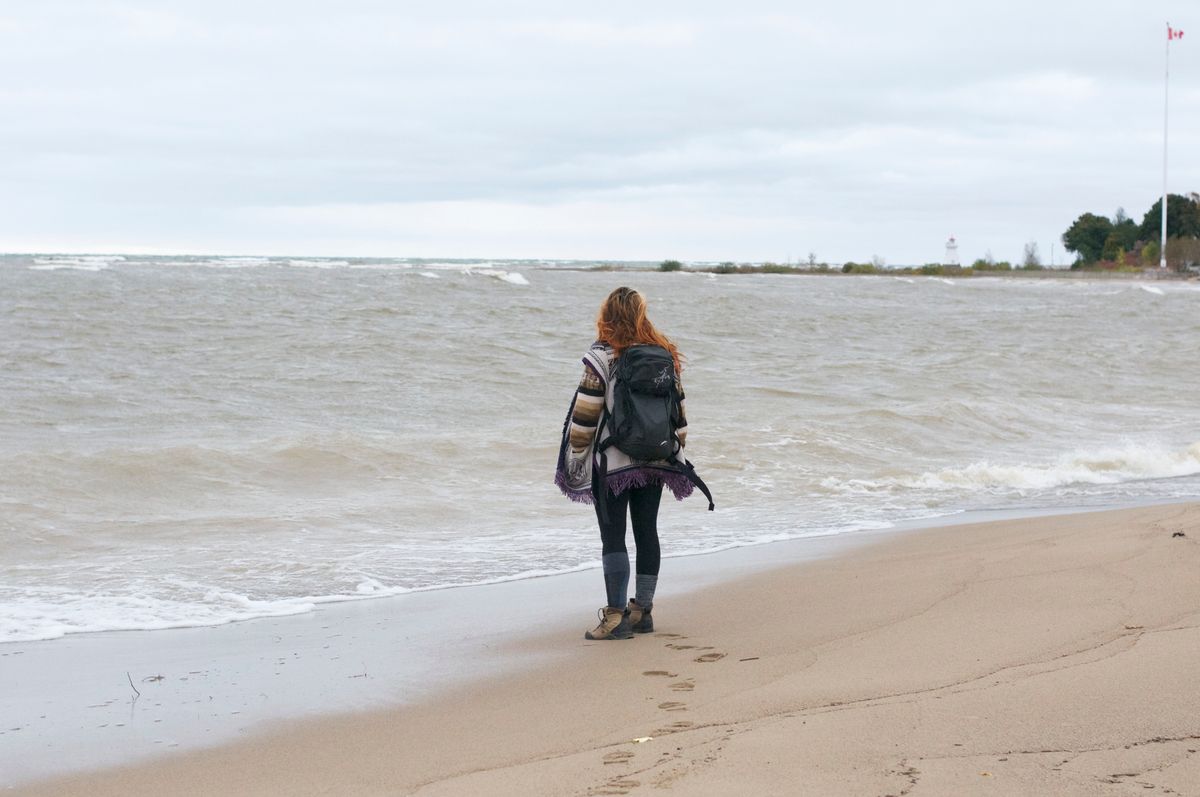 The language of staying alive

Depictions of suicide, being in the hospital, and violent language.

Two days after I was brought to the hospital for ingesting a 210mg concoction of really potent sleeping pills and other drugs meant to kill me definitely, I was sitting at a table at the university, pretending everything was fine, listening to some of my co-workers talk about Ikea.

One of my co-workers said, loudly, loudly:

I would rather kill myself than go to Ikea.

I'm fairly certain he thought he was being hilarious, since he could not stop repeating:

I'd rather die than be forced to go to Ikea. Suicide is the better option. I hate that place. I'd rather kill myself.

I sat there, a styrofoam cup of tea cooling between my palms, in silence. It was a Thursday. I'd gotten out of the hospital very, very early just that morning. Listening to my co-worker, I felt an acute pain in my arms, on the inside of my elbows, in my stomach. Despite the too-hot June weather in Montréal, I was wearing long sleeves. I thought I was going to throw up - my mouth, now dry, still tasted like the powdery chemicals they forced me to ingest in order to pump my stomach. The soft, inside parts of my arm were bruised from IV lines, from wrestling with nurses, from being transported roughly like a listless sack of limbs.

To say: "please stop, this lab is supposed to be a safe space" sounded whiny to my own ears. He was just making dramatic statements as a joke. He has good intentions, and I'd be making him feel bad. I didn't want him to feel bad.

To say "please stop, I actually tried to commit suicide this last Monday and only left the hospital yesterday" was to acknowledge what I was trying really hard to pretend wasn't happening.

The new normal settles in. Eventually making morbid jokes with myself when I've made a mistake becomes reoccurent and usual:

"Someone should take me out behind the barn and put me out of my misery", I'll joke.

"Oh someone shoot me" I'll say when I'm really embarassed. "I don't deserve to live."

It's hard to reconcile that in June, I was in the hospital and my parents were terrified I wouldn't make it.

What's wrong with me, that even though I know better than to use this language with myself, with others, I still think it's okay to joke about killing myself, just like my coworker did.

Is it because jokes are a mechanism with which we desensitize and reconcile with heavy topics? This idea doesn't sit well with me, because of comparable existing rhetoric that surround rape "jokes", and why they are not okay.

Then yesterday William Hughes for the website avclub.com wrote this article about real grief and cheap cinematic shorthands. The article is moving and painful to read. It felt like those early, early days, before I went on medical leave, when I was still pretending that nothing had happened, the violence of my own self hatred and sick mind fresh, fresh, fresh on my skin, under my skin. Even though I was able to sit at a table with co-workers and perform as a functional human being, I was thrown out of my "make believe" performance completely when one of my co-workers relied on the enormity of suicide to express the depth of his dislike for Ikea.

I'm quite familiar with the idea of "idioms" like this, especially those idioms that are used as cultural "shorthand" to communicate in stories, as Hughes describes:

It’s not really Guardians of the Galaxy’s fault — dead and dying parents have been a motivating trope since people first started writing down stories. But the movie’s opening, with young Peter Quill failing to say goodbye to his dying mother, is still blatant, gross manipulation of its audience, and, sitting in that theater with tears streaming down my face, I found myself getting pissed off. Having death shoved in my face in the first minutes of what was supposed to be a vacation from the shitty reality of my life tainted the entire movie-going experience, and suddenly, I couldn’t help but see every subsequent moment of the film — the weirdly bloodless combat, the plot-mandated sudden sad revelations that occurred like clockwork every 15 minutes, the perfunctory killing off of the supporting cast — as bald manipulation by people who didn’t understand what sorrow really was, or that death wasn’t just a plot device but a real thing, hideous and ever-present.

Hughes' article is worth a read, and makes valid critiques of death's impermanence in media and literature, on top of his valid points about decontextualization and trope-stereotype-shortcuts, and the freshness of grief.

There's a larger cultural context that allows for movies like Guardians of the Galaxy to exist, which Hughes glares at briefly :

The PG-13 rating, which divorces death and violence from blood and consequences, has become my nemesis.

La Toussaint (literally, French for All Saints Day) is the 1st of November of the Catholic calendar in France. It's a day that remains a vestige of the older death cults or death religions that once covered most of Europe. Spanish Catholic conquerors brought that religious celebration to Colombia, my abuela's country, called the Día de Difuntos:

My birthday is around this time of year, which for a long time in my family, both on the European and Colombian sides, has been associated with death. When spring comes, and the death that winter represents melts away, the renewal of the seasons allows us to move on. Time brings a new season, a new normal. But autumn, as October turns into November, is a bit solemn.

Abuela used to bring us to the cemetary to visit the graves of family members I'd never met. My childhood is filled with stories of great uncles, sisters, and great-great grandparents who died a long time ago. Some were young, some old, some died far, far away from their homes, on a mountain in a cold city oceans away from their cultures and country.

The permanence of visiting graves of people I'll never know contrasts sharply with the impermanence of winter in Québec.

The inconsistent way in which we use violence to describe banal things (visiting Ikea, making a mistake) is telling - I use it now, frequently, as if June never happened, even though sharing what happened to me has become easier.

A screenshot of Borderline, an art game about when I tried to die

My partner, who often spends time with me when I'm working on a problem, can't stand it when I use violent language against myself. At first he didn't react to it-but more and more he asks me to stop and think about why I do it. I started reflecting more about the language about dying or staying alive. Every time I call myself stupid, or that I should be put down behind the barn, I'm essentially using cultural shorthand to communicate my shame, but I'm also communicating that I think it's alright to use incredibly violent language against myself.

This kind of mental and verbal shortcut is damaging in a coherent, "real world" sense - if the mistake I made was for work or for university classwork, blaming the mistake on my "stupidity" or "inate deserving of bad things" actually impedes the process of learning from my mistake. If my first reaction to a problem is to wince and mutter "I'm so stupid" - I'm losing the opportunity to reflect thoroughly on what happened and what I should learn from it.

I'm especially myopic regarding my self-destructive behaviour, as I wrote back in August:

Unless one is openly delirious or suicidal, self-destructive behaviour is considered normal, and obfuscates our ability to recognize out-of-control spirals. [...] It’s a piece of the puzzle that is mental health: even though I may be arrogant and proud about what I create, my attitude towards myself manifests itself as hatred for my mind and body. [...] The more I punish myself by overworking, perhaps one day I’ll actually deserve any of the good things that come with critical success.

I joke about killing myself even though I have tried killing myself. I joke about hurting myself over mistakes in my homework or when configuring a server because it's become a tic, an impulsive exclamation of frustration just like a swearword. Though I discovered how frightening it is to be on the receiving end of ableist language and jokes are this summer, here I am, five months later making the exact same jokes-by myself, to myself.